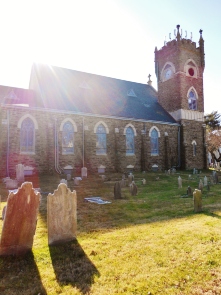 Saint Michael’s Lutheran Church has been operating in the Germantown area for close to 300 years, yet the early beginnings of the congregation are hard to trace. It is believed that a stone church stood on the current site as early as 1730. The original structure was renovated and enlarged in 1746 to accommodate an increasingly large German immigrant population in the area. In the early 1750’s a sacristy, bell tower, and pipe organ were installed into the newly remodeled church. The church also boasts an impressive history of diversity, beginning on October 1st 1752 when a black student of the church’s pastor was baptized, arguably the first baptism of its kind in the Lutheran faith. During the Revolutionary War, the church was occupied and ransacked by the British during the Battle of Germantown. The cemetery of the church houses the remains of prominent revolutionary war veterans. A cornerstone was laid for a new church on the same site in the spring of 1819. As construction on the new structure commenced, the original church building was demolished. The 1819 structure did not have a bell tower, like its predecessor, because the original bells were damaged upon their removal. By 1897 the congregation had outgrown the structure and a new building, the church’s current home, was dedicated in 1897.

In 1817 the church began admitting students into a Sunday School program, one of the first of its kind in the United States. The American Sunday School Movement gained in momentum during the first half of the 19th century. The Movement’s goal was to educate underprivileged children during a time when they were likely to be off from work. The St. Michael’s Sunday School program was so successful that branches were operated in the surrounding neighborhoods of Chestnut Hill, Nicetown and Rising Sun, among other locations throughout the area.

St. Michael’s Lutheran Church is building upon its historic efforts in education and diversity to this very day. The congregation is currently led by Reverend Ingram, who is the first African American woman to hold the position of head pastor at the church. Pastor Ingram has actively been working with local charities and her own grassroots efforts to promote HIV/AIDS awareness and education in the Germantown community. Through Pastor Ingram’s efforts, the church offers many free HIV testing and prevention programs for the Northwestern Philadelphia community.