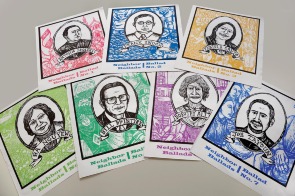 Throughout history, broadsides—notices printed on sheets of paper and distributed to the public—have been used to communicate newsworthy information. Sometimes broadsides were political treatises. Sometimes they were advertisements. Sometimes they were commentaries on current events. Always there was a sense of urgency: in the most famous of Philadelphia examples, as soon as it had been signed, the Declaration of Independence was printed and distributed as a broadside. With "Neighbor Ballads", the stories of seven South Philadelphians were told though poetry and portraits with that same sense of urgency. Their personal histories as news.

How do we know that something is news? Usually, we are clued in by how it is delivered to us: on our front doorsteps each morning, on the radio as we drive to work, in the evening on television as we eat dinner. In the hands of poet Frank Sherlock and printmaker Erik Ruin, "Neighbor Ballads" was presented as news by being distributed through newspaper “honor” boxes—metal boxes that distribute the free tabloid-style newspapers that are fixtures of modern urban America. Starting in the Italian Market, and running down Ninth Street to East Passyunk Avenue, and then down East Passyunk Avenue to Morris Street, each of the seven South Philadelphians had their own box, displaying their portrait and announcing the importance of their story.

The stories of these South Philadelphians came from Two Street, from Point Breeze, from Bella Vista, and from points in between. They began chronologically with the tale of Father Isoleri, a leader in the nineteenth century Italian immigrant community and the pastor of St. Mary Magdalen de Pazzi, the first church in the United States established for Italian Catholics. They ended with Fabiola Canto, who is a recent Mexican immigrant. In between, the broadsides touched on the dockworkers of the Delaware River, the challenges facing Vietnamese refugees, the entrenched history of African Americans in South Philly, the little-known but historic Lebanese community, and the Mummers.

These stories honored the particularities of an individual’s journey-based narrative, while focusing a lens on that individual’s community. When viewed as a whole, the broadsides illuminated the shared experiences of the ongoing history of a legendary part of the city. When looked at individually, they gave voice to the ordinary people who have shaped the character of a unique and culturally rich South Philadelphia.

You can listen to the ballads read by artist Frank Sherlock by clicking on the audio icons in the media browser!

See the ballads as they appeared in the broadsides here:

Neighbor Ballad No. 1: The Ballad of Antonio Isoleri

Neighbor Ballad No. 2: The Ballad of Frank Snock

Neighbor Ballad No. 3: The Ballad of Fabiola Canto

Neighbor Ballad No. 4: The Ballad of Ba Nguyen

Neighbor Ballad No. 5: The Ballad of Bill McIntyre

Neighbor Ballad No. 6: The Ballad of Dorothy Allen

Neighbor Ballad No. 7: The Ballad of Joe Tayoun