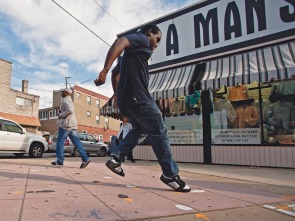 East Passyunk Avenue between Dickinson Street and Broad Street is going through a flood of change. Ten years ago, the restaurants lining this long-time business corridor were almost exclusively Italian American, and the only bars were decades-old taverns. In the residential streets that flank East Passyunk, home prices had remained low, with families living on their blocks for generations. But in a few short years, sushi bistros have joined the red gravy joints, and newly-minted micro-brews are on tap at taverns both old and new. Mancuso’s Cheese Shop, famous for homemade ricotta, has been joined by an organic grocery and a French bakery owned by Cambodian refugees. These changes are bittersweet: they alter the tenor of “the Avenue” but also revitalize it, bringing it back to the vibrant, bustling business corridor it was throughout much of the twentieth century.

Balanced at the moment of this revitalization, "Start Here" used video, oral history, and movement to explore the choreography of journey. Beginning at the corner of Morris Street and East Passyunk, Arthur Murray-style instructional footprint patterns constructed of multicolored pavement tape led pedestrians south. Each set of footprints mapped out an original choreography that was created by drawing on first-person “journey stories”: how a person or a person’s family came to the United States and eventually became rooted in South Philadelphia. The footprints ended at a vacant but perfectly preserved barbershop, where video and audio installations further explored the stories of the sidewalk choreographies.

Working together as Miro, dancer and choreographer Amanda Miller and video artist Tobin Rothlien anchored "Start Here" with the question, “Where do the paths of immigration intersect?” Miller based each person’s dance in the actual geographic pattern of their journey, moving the footsteps from east to north to south to west in alignment with their trajectories. For some, these journeys were complex and their very pattern mirrored their life experiences. Living through the upheaval of the genocidal Pol Pot regime in Cambodia, Samnom Mao Chan moved back and forth from village to city to countryside and finally to America—the chaos of his life reflected in the chaos of his travel. Other journeys were more direct: Eva Hernandez traveled north and east from Mexico City to New York City, and then made a short hop south to land in Philadelphia. But through their conversations, Miller learned that Hernandez loves to salsa, and so her journey follows the pattern of salsa steps.

After installing the sidewalk patterns, Miller taught each person “their” dance. Rothlein then filmed the person performing their dance—figuring out the next step, trying to find a pathway through their own story when reinterpreted by another. These videos were displayed in Monastero’s Barbershop and paired with “portrait” videos which focused on illuminating an essential part of each person in a setting outside of Passyunk Avenue. Additional videos of the dances, broken up in cross sections and close ups across multiple channels and frames, were visible in surrounding shop windows from dusk until two in the morning. Monastero’s was open to the public during selected hours. In addition to the videos, unedited transcripts and audio tapes of Miller and Rothlein’s interviews were on hand, inviting audience members to pause in their own dance and reflect on those whose footsteps they had just traced.