Cave of Kelpius: Johannes Kelpius and the Society of the Woman in the Wilderness 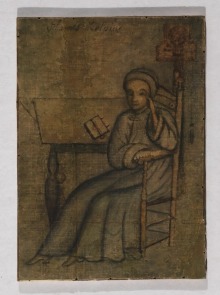 A small fire ignited on the top of a hill overlooking the small town of Philadelphia. Part of the large group of forty men in loose-fitting, plain robes tended to their flame while the others searched for more fuel. They returned with fresh plants—just-picked flowers and large limbs torn from the many pine trees—and threw them onto the burning pile. As the flames consumed these new additions, they burned bright and climbed high above the cult members’ heads. This Saturday, June 23, 1694, was the group’s first day in Pennsylvania and only days after the summer solstice. More importantly, they had arrived on the sacred day of St. John’s Eve, and they gathered around the blazing fire to perform the appropriate rites.

The mystics remained on the hilltop until the fire finally died down, and then they scattered the embers downhill. They believed the ceremony would ward off evil as they created a settlement in the wilderness to await the Second Coming of Christ. After their long journey to the American colonies, the group was content to rest that night and descended to the sleeping town below them. They would leave for Germantown in the morning.

Johannes Kelpius, the man who lead this group, was born in Transylvania around 1667. Born to a Lutheran pastor, he developed an interest in theology at a young age. Kelpius excelled as a scholar and received a doctorate of philosophy and the liberal arts in Nuremburg in 1689, where he received a “thorough scientific and religious education.” He became fluent in German, English, Latin, Hebrew, and Greek and used his knowledge for religious study and philosophy. The young man continued his studies and attended the University of Altdorf, where Dr. Johannes Fabricus closely nurtured his academic ambitions. Kelpius’s prowess was such that, during his first year at Altdorf, he collaborated with his mentor to publish two books in 1690.

During his life, Kelpius witnessed the growth of the religious and mystical movement called Pietism. It originally began as a faction of Lutheranism in Rome, but spread across Europe and grew particularly in Germany. Pietism rejected reliance on institutionalized religion and instead advocated deeper personal relationships with the spiritual world. Mystics especially found Pietism attractive because of its similarities to their own beliefs. Pietism’s popularity spread quickly in Germany’s intellectual community and shaped the academic environment that Kelpius studied in.

Although Kelpius guided the Pietists to America, he was not the group’s original leader. Johannes Zimmermann, a noted mathematician and astronomer, took to mysticism and became convinced that Jesus Christ would descend from the heavens to begin the millennium in March of 1694. To prepare for the Second Coming, Zimmermann organized a group of forty devotees (including himself) to await the return of Christ in the New World. The work that Fabricus and Kelpius published impressed Zimmermann, and he sought out and recruited Kelpius as his Deputy Magister.

Under Zimmermann’s direction, the group planned to settle in the woods surrounding the scarcely-settled Philadelphia. Pennsylvania proved an obvious choice with its reputation for religious tolerance and secluded environment where the Pietists could devote themselves to perfecting their souls uninterrupted. The wilderness, they concluded, provided them with the best environment to receive divine revelation in the manner that Moses and Elijah had. Furthermore, the port at Philadelphia was near the fortieth parallel. Mystics considered forty to be the perfect number, as Moses spent forty days on Mt. Sinai, and Christ wandered in the desert for 40 days, among other things.

In the summer of 1693, Zimmermann’s group of forty Pietists rallied in Rotterdam, Holland, where they prepared for their journey. A Dutch Quaker, believed to be William Penn’s Rotterdam agent, Benjamin Furley, took an interest in the group and their beliefs and provided them with 2,400 acres of land in the new world and £130 for their passage. Zimmermann’s unexpected death later that year delayed the group’s journey. Kelpius took Zimmermann’s place as leader, and after restoring the group’s membership to forty, Kelpius, “convinced by God, resolved upon going to America.” On February 13, 1694, Kelpius boarded the English Sarah Maria and set sail for London.

The group’s voyage coincided with the early part of the French and Indian Wars, and the travelers relied on their spiritual strength to persevere through mortal dangers. On the second day of the voyage, a storm threatened to ground the ship on sand-banks. Kelpius was “admonished (divinely)” to confront the worried captain with the advice to “Have faith in God, who certainly will save us.” The captain excitedly accepted this blessing, and the winds of the storm changed and blew the ship “away from the sand-banks into deep water, where… [they] praised God in safety.” Days later, the ship credited group member Heinrich Köster’s “most fervent prayer” for dissuading a Swedish impress gang from taking three of the captain’s best men for the Swedish Navy.

After reaching the English Channel, the Sarah Maria joined an international convoy with “several foreign men-of-war” and left for America after a delay in Plymouth, England, where the Pietists spent most of their time “in sacred exercises & meditation.” After joining another convoy of thirty-eight vessels, the group encountered a hostile French fleet of three ships, the largest with twenty-two cannons. While the Pietists prayed, shielded behind crates, the convoy captured the smallest of the French ships, “although,” Kelpius added, “we could have captured the rest.” The Sarah Maria left the convoy in May and continued alone. After a total of ten weeks, it landed in Philadelphia on June 23, 1694, where the mystics literally kissed the ground beneath their feet. They celebrated their safe journey later that night as they marked St. John’s Eve.

The Philadelphia that received them did not yet have a courthouse, and the only places of worship were Quaker meeting houses. The closest churches lay outside of the city in Swedish Southwark. On the morning of June 24, the group began a four-hour hike to Germantown, where they found that the religious community was just as underdeveloped. Only the Mennonites and Society of Friends (Quakers) held “occasional house services.” The Pietists immediately began a campaign to raise the “moral standard” in Germantown. Kelpius began by setting up regular Lutheran services in both German and English to benefit the neighboring English community. Köster “at his own expense had a large number [of Bibles] sent over from England” because there were “few or no English Bibles” when they arrived.

The Germantown residents warmly received Kelpius’s group, which split up to live with the locals temporarily. The hermits, however, still planned to take sanctuary away from town in the forest, and the neighborly Germans gladly donated their time and resources to help them build a tabernacle near the Wissahickon Creek. Construction on the tabernacle, named the Hermitage, began in 1694 on the highest lot available. The giant log homestead occupied forty square feet of land. A large hall on the first floor for “religious and musical services” sat next to a schoolroom and forty “separate…cell-like rooms” for each of the Pietists filled the rest of the building. Resting on top of the tabernacle was an observatory. Years later, British General William Howe’s mansion replaced the old tabernacle.

With the completion of the tabernacle, the men had privacy to practice their devotion away from Germantown. Still, they continued to engage with the German community. In the great hall of the Hermitage, they held public religious services twice per day. In an effort to unite the many Christian sects that Johann Seelig described as being “in constant opposition,” services were nondenominational and held in both German and English, with original, bilingual hymns. The group welcomed anybody to the services and encouraged congregants to debate points during the service. Less frequently, the hermits held services in Germantown.

The mystics used their home to fulfill other needs in the German community. Germantown parents readily sent their children to learn at the tabernacle’s schoolhouse, which offered education with the Pietists’ spiritual influence “so as to lay in them the foundation of a stable, permanent character.” A large garden maintained by the hermits provided them with their own food, medicinal herbs, and “the coarse homespun material” that they used for clothing. Germantowners frequently consulted the mystics for bloodletting to cure and prevent illness. German superstition held that the operation’s success depended on the proper planetary alignment according to one’s horoscope, and the hermits had the ability to determine when the time was right. The hermits offered all of their services for free and refused to trade for profit. When they were not acting to help the community, the Pietists spent their time studying religion and debating doctrine.

Although the group never named itself, the Germans called them The Society of the Woman in the Wilderness, a reference to a passage in the Book of Revelation (Rev. 12). Kelpius and his followers spent their time along the Wissahickon preparing for “the last and greatest Witness…to produce JESUS the Messiah of God.” A reserve of members were “continuously on the watch at night with a telescope and other instruments” in the tabernacle’s observatory for Jesus’s physical body as He descended from Heaven to reign on Earth for the new millennium.

Contrary to Zimmermann’s prediction, Christ failed to appear in 1694, but the Pietists only became more excited as 1700 neared. In 1699, Kelpius wrote that “such Miraculous Powers” as he observed have never occurred so quickly “since the days of the Apostles.” The Barbados Plague that came to Charleston in the summer of 1699 appeared to be another sign. Again, Jesus failed to arrive and enthusiasm in the community began to gradually decline. Many of the members still devoutly awaited the Second Coming, but others left. Since the group arrived in America, it had lost members tempted by “the necessaries of this life” that “heap up great barriers [against] the Christian soldier.” Although the group managed to recruit new members from Europe before 1700, they did not share the same zeal as the original members and left more quickly.

As time dragged on, Kelpius, a man of “frail constitution,” weakened physically, and he succumbed to an illness that forced him from the tabernacle. In 1705, he moved into the care of a former society member in Germantown. After a brief recovery, his condition grew even worse when “a great cold seized [him]” and forced him back to his bedridden state. Ever devout, he continued to work, writing hymns and keeping up with his peers in Europe. His mystic brethren brought him medicines daily and prayed for his recovery or deliverance. Kelpius passed away near the end of February in 1708. The mystics returned Kelpius’s body to the tabernacle, where they had dug a hole in the garden for his coffin. At the moment the sun set, they lowered his body and released a lone dove to fly to the heavens.

After Kelpius’s death, Johann Seelig, then Deputy Magister, became the group’s next leader for a short time. When Seelig left to pursue his own life of solitude, the society fell under the charge of Conrad Matthäi. Another blow came when two of the group’s most charismatic members left to become fulltime pastors. Germantown’s population continued to grow larger and closer to the hermits, making it increasingly difficult to live in seclusion. The demand for pastors among the settlers grew with their population, and many of the Pietists felt that there services were needed more among the public than at the Hermitage. Others left to practice medicine, bookbinding, teaching, and/or to participate in civil politics. Those who remained at the Hermitage influenced other groups, such as the Mennonites who sought them out for guidance as late as the 1720s. The society did not last beyond Matthäi’s leadership, but it created a conscious awareness of spirituality that strengthened Germantown’s faith.