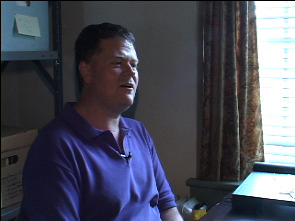 Librarian and archivist Alex Bartlett combines his hobbies with his career. Working for both the Germantown and Chestnut Hill historical societies, Bartlett manages the libraries’ collections and archives, while also helping to provide visitors with requested research documents.

“I’ve always been into history and I’ve lived here, so when I went into the museum and historical society field, it was a perfect fit,” Bartlett said.

Bartlett is a self-described “history nerd,” with interests in archeology and old bottles and glassware. He said that growing up in Germantown is what initially stimulated his enthusiasm toward historical documents and objects, and his job manages to integrate all of his interests into one field.

“It’s this really nice mix of objects, people and history,” Bartlett said. “So I would say I really lucked out.”

Local Germantown residents often visit Bartlett to find historical information about a present house or piece of property. He said that many of these individuals are often doing restoration and want to see photographs of his or her house in its earliest condition. Bartlett said that students and recently retired individuals are other common incomers to the library.

We Is Got Him author Carrie Hagen was also a frequent visitor at both the Germantown and Chestnut Hill historical societies. She was a familiar face at the libraries while she was researching the 1874 kidnapping of Charley Ross.

Bartlett said that it is not unusual for certain researchers to visit the libraries constantly during a specific period of time. He said that some individuals come to the historical societies in order to gather extensive information for long-term projects.

“That does happen where someone will make repeated visits,” Bartlett said. “There aren’t enough hours in the day for some folks who are really doing in-depth genealogy, or for example Carrie with her book.”

While Hagen viewed many documents, the Germantown Historical Society owns a collection of old atlases that Hagen said she found particularly beneficial to her research. The color-coded atlases outline specific neighborhoods, denoting properties and the specific construction of houses and buildings.

“You can look at the atlases of the different neighborhoods of the time, the different wards, and you can see who owned how much family property because the names are written in color coded boxes,” Hagen said. “That was actually a fabulous find.”

Though the two kidnappers targeted Sarah and Christian Ross for their assumed wealth, Hagen said the couple was actually part of the emerging middle class. When looking at the atlases, Hagen found that Sarah Ross’ family owned a large amount of land around Germantown, indicating their wealth. But while she came from money, Hagen said that Sarah and her husband did not have much on their own.

“I could tell that her family had more property to their name than Christian did,” Hagen said.

While Hagen used the atlases in order to research the past, Bartlett said that historians, archeologists, architects, preservationists and urban planners still consult the documents today for present uses.

The Germantown Historical Society has atlases from the year 1871 to 1955 that depict Germantown, and Bartlett said they are some of his favorite documents in the library’s collection.

“I just love them,” Bartlett said. “They’re just some of the most interesting, fun, and immediately rewarding things that we have.”

But while Bartlett is enthusiastic about history, he said that being so immersed in the field has affected his outlook on life.

Having recently just turned 40, Bartlett said he realized his work has made him more sensitive toward the subject of time and the length of one’s life than the average person.

“It’s made me a little more aware of how quickly time passes, and sort of the meaning of time and what ten years really is,” Bartlett said. “People think a decade is a long time, but it’s really not.”

Bartlett said that he finds it interesting to think about future people who could end up in a historical society’s collection. He said that it is even fun to contemplate whether his own name will resurface in one hundred years.

“Will I turn up here in the archives?” he said. “Or am I going to be one of those people some researcher’s going to come in for, and someone’s going to say, ‘Nope, we don’t have a thing on that guy.’”

For more information about the book about the Charley Ross kidnapping, go to http://bit.ly/muBpTL

This article was written and reported by Natasha Shaprio and Niambi McDonald for Philadelphia Neighborhoods, a publication of Temple University's Multimedia Urban Reporting Lab, and originally published on June 24, 2011.