Germantown Church of the Brethren: The Poet of the Neighborhood 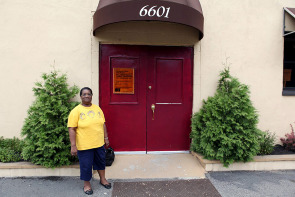 RuNett Nia Ebo wrote her first poem in 1960 and hasn't stopped since. Early on, she discovered the therapeutic value in poetry. She used it to deal with the death of her grandfather with whom she had been very close. It was this healing process through written word that inspired Ebo to pursue writing more seriously.

The name Nia, which means "purpose" in Swahili, was not given to Ebo at birth. It was adopted in college as a pen name for the school newspaper. Still, "Nia" stuck and at the age of 25, Ebo had it added to her legal name.

As an adult, Ebo faced several challenges. "I got my divorce in '87 and he didn't come back into the picture until 2000," Ebo said. A single mother raising five sons, Ebo said she was on welfare for a time in order to get by. During this time, she began to realize the importance of writing in order to keep focused on her goals, Ebo said. "I went from welfare to work to owning my own business."

It was Ebo's sons who encouraged her to publish her work. By the 1980s, her writing was becoming widely known in the Germantown poetry community and even copied by others.

Over the past four years, Ebo has developed a close friendship with another well-known Germantown poet, Victoria Huggins Peurifoy. Peurifoy adopted Ebo as a mentor after seeing her perform. The two have been inseparable since. These days, Ebo said Peurifoy no longer needs her as a mentor and instead the two bounce ideas off of each other constantly and help each other develop ideas for new work.

After a difficult time in her own life, Ebo now brings creativity and inspiration into other struggling lives. She continues to be an active member of her Germantown neighborhood, hosting a family-friendly open microphone at the Germantown Church of the Brethren. She also attends monthly coffee houses at the First Presbyterian Church in Germantown and appears at other local events to share her work.

Ebo has performed her poetry everywhere from middle schools to nursing homes to women's rehabilitation centers, where she helps women who have been sexually abused or are victims of domestic violence deal with their experiences. "It doesn't matter what you came from, the only thing that is important is what you learned from it and where you're going."