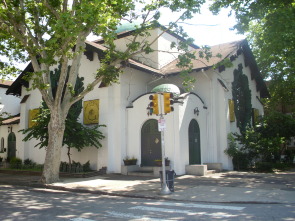 In 1907, St. Andrew’s Methodist Church was built at the northeast corner of 45th and Walnut, in a neighborhood that is now the western portion of University City, or Spruce Hill. While the church remained a place of worship for the next 90 years, it changed hands numerous times reflecting the changing ethnic makeup of the neighborhood; indeed, at the turn of the twentieth century, working-class immigrants arrived in droves and changed the face of the formerly upper-crust Protestant neighborhood. Immigrants, as well as African-Americans arriving during “The Great Migration,” would continue to change the neighborhood throughout the twentieth century. In 1991, the church building became the national headquarters of the international Association of Islamic Charitable Projects (AICP). This non-profit association, which has stressed moderate Islam since its inception in the 1930s, is a religious community center for Philadelphia-area Muslims and has helped revitalize a once blighted area.

According to Linda Hauber, an administrator who has been working at the 45th and Walnut location for the past 12 years, “the effort of the organization as a whole is to try to teach moderate Islam, to try to teach the balanced religion, and to try to preach against extremism.” It goes about this task by running a K-8 school and a mosque, conducting Saturday schools, and more generally by making a real effort to create links with other communities while making sure to keep its own community vibrant.

AICP selected West Philadelphia as its national headquarters for a few reasons. First, it was populated with Muslims, and AICP had already begun to establish a community in the area prior to rehabbing the burned out property at 45th and Walnut Streets. For example, it rented out space to teach classes at University of Pennsylvania and taught in West Philadelphia homes.

Islam really broke the ice in this area when the Nation of Islam was on the scene in the 70s. The nation was very popular here. You found these Mohammed mosques on different corners, but then of course it started to change to the non militant type of Islam, the softer and religious side of Islam, and they became regular Islamic mosques.

Moreover, West Philadelphia was ideal because of its multicultural makeup. “Being in an international area made it comfortable for people of different cultures and races that are Muslim or non-Muslim to come here to learn,” Hauber explained.

Yet when the AICP bought the burned out Church on 4431 Walnut Street in 1991, the neighborhood was wracked by poverty and the drug trade.

When we first took this building, this neighborhood was a lot different…a lot a lot different. I remember even twelve years ago coming to work and there was crime scene tape constantly at Samson street. There would be news vans on the corner… it was a constant thing. The area was very heavily populated by Cambodians. Drug dealers were running a lot of junk here on the corners. And this back block behind us on Samson Street was almost all renters. When you don’t have home ownership you don’t always have pride in your house. So things were falling down and it was really in bad shape. Really, I mean if I had to walk (I lived around the corner at one point before I had my second child) over this way, I never walked down Samson street during the day. That’s how scary it was to me. It was like a different world, here Walnut Street and there Samson Street.

AICP committed itself to improving the area by branching out and working together with its neighbors. According to Hauber, “we wanted this community that we were bringing ourselves and our children into to be a better place.” At first working closely with Spruce Hill Community Association, the University of Pennsylvania, and now in recent years with University City District (UCD), this Muslim community helped recover the neighborhood’s former vitality.

There was a woman who worked at Spruce Hill Community Association named Jane Silverman who did a lot of work to improve this community. She lobbied [3rd District Councilwoman] Jannie Blackwell to fix up the park on the corner on Samson Street so the children had a nice place to play. UCD did a lot to improve Samson Street to thin out the trees and make the lighting better. We tried to work with them and be whatever presence we could, and lend whatever help we could.

Moreover, because there was already an established Muslim population, and because of the improvements AICP was helping to make, there was no friction when the mosque came into the neighborhood, despite the fact that the building used to be a Christian Church.

When we first came here twenty some years ago and established the Masjid here and started working, a lot of the guys from our congregation stayed out and did security at nights to keep the work we were trying to do from being destroyed, because the windows were gone and we were replacing them. They stayed out there night and day for a long time for a couple years. They ran shifts until it improved, until the gangs didn’t feel so powerful anymore, and they started to finally phase out and started to move away. That was a huge improvement for this community, so nobody could say ‘why is this Islamic place here’ and 'we don’t want it here’ because we improved a lot.

We’ve tried to be a positive presence in the community. I mean, we’re non-profit. We don’t have big funding, but we’ve tried to pull weight and do community cleanups and similar things to try to be an improvement to the community and not a detriment. For example, the building across the street from the Masjid, where the stores are, was a dump, it was horrible, and we moved in there and opened a store. We at one point had an ice cream and water ice store there. It has changed hands a couple times, but we’ve also had a meat market among those stores as well.

Some members of the AICP community started a café across the street called Manakeesh in place of an abandoned bank. Ingredients are shipped regularly from the Middle East, a process that reveals the transnational and even supranational ties that AICP fosters. The organization unites not just Arabs (mainly from Lebanon and Syria) and African Americans, but also the recently-arrived Eritrean community. “One of our main teachers came from Eritrea, so that makes them feel closer to him, too, because they learned from him when he was over there and can come here and still get the same kind of teaching.” The AICP community in West Philadelphia also includes Croatians and Serbians, Indonesians and Malaysians, Spaniards, and Liberians. Moreover, though they are not as involved in the AICP community the Malian and Guinean communities of West Africa hold monthly meetings at AICP. These groups are either French speakers or speak a native African language; the language barrier prevents full participation in AICP.

Importantly, the children of these groups attend school together at the same location:

One of our efforts was to establish an elementary school to foster an alternative to parents who didn’t want to send their children to public school and to develop strong children in their religion and in the society—honorable, good respectable upstanding kids which is how they generally come out.” There are also classes on Saturdays, as well as Boy Scouts and Girl Scouts clubs. And, AICP holds special events during Ramadan, Eid-Ul-Adha, or “The Feast of the Sacrifice,” and smaller holidays.

Since AICP established itself in West Philadelphia, Islam has grown a great deal in the Philadelphia area. Hauber, who grew up in Collingswood, NJ and converted to Islam over twenty years ago, elaborated:

When we first came to Philadelphia, there were not as many Muslims as there are now. Islam has grown a lot in the city even since I’ve become Muslim. I mean, I’m amazed as to the different faces I see. I was definitely among the minority as a white Muslim. I never went out in black because people always thought I was a nun. Islam was just not there. I lived in South Philly—even when I wore colors people would call me sister, and I knew they were thinking I was a nun. So, yes, Islam and the awareness of Islam has grown a lot.

In criticizing both extremism and the tendency of some Muslim communities to self-segregate, Hauber concluded:

We at AICP are known for moderation. People know that we are easy. How are you going to want to sit and talk to me and find out about history if we act otherwise? You won’t want to. One of our core beliefs is that you have to talk to people about Muslims and Islam…because if you don’t and don’t tell people about who we are and what we’re doing, then how will people know? How will people know about us and not think of us as a foreign entity? So we try to make every effort…to say ‘hey look, we’re real people too and this is our history.