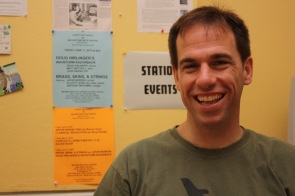 Tucked into a small nook between Maplewood and Chelten avenues is the outdoor Maplewood Mall. Red brick and grey cobblestones line the historic street where carriages and horses would be more at home than cars and trucks. Signs decorated with quaint pictures and elaborate script hang from the exteriors of Victorian and colonial style homes turned store front. While this small provincial street would seem more appropriate to Old City, it is Germantown that lays claim to this hidden treasure.

According to Jim Bear, owner of Gtownradio.com, which is based in Maplewood Mall, the block used to be residential, though it was converted into a business area around 40 years ago. “The state [that Maplewood Mall] is in now is the state I’ve seen it in for the 13 years I’ve been here. It’s always looked the same, but it’s not necessarily thriving either,” Bear said.

Bear reminisced of stories told to him about the mall, recalling a time when the street was more of a staple in Germantown culture. “Whenever I meet someone in their 50s or older that lived in Germantown for most of their life, they’d always talk about a bar called Takers’, or Takers’ Saloon and said it was quite the hangout in Germantown back in the day. I heard it was in the neighborhood for a while, a place all types in Germantown were going to.”

Now, while a few store fronts proudly display their attractive banners, the largest trend of Maplewood Mall is its selection of businesses boasting nutritious food. At 51 West Maplewood Mall hangs a green and yellow sign bearing a cornucopia and the words “Maplewood Nutrition and Dietary Food Shop.” Since its opening in 1963, Maplewood Nutrition has provided both choice nutritional foods, such as natural fruit and vegetable juices, vegan canned goods and an array of vitamins and herbal supplements.

“My husband was interested in this type of food,” said co-founder Charlotte Ciment, “and that would be almost 50 years ago, when it was really not popular. So we he had an idea that this was the food of the future, and he opened this little store in this backstreet just to try it out, and it has lasted almost 50 years. Because people are more interested in what they put in their bodies now.”

Levonne Moore, an employee of Maplewood Nutrition and Dietary Food Shop, has been with the company since the age of 10, and has come to know his fellow employees as family. “We offer the finest and the best vitamins and herb supplements in the city,” he boasted, while Ciment shuffled around him to help a customer. “We have different foods, and specialty items and over 250 herbs. We have a section next door, which is where we keep our foods for vegetarians and vegans.”

Twenty years ago, the store broke from one narrow room into a dual set up. On one side of the building, behind a small door is the vitamin and supplement portion of Maplewood Nutrition and Dietary Food Shop. Upon exiting, one only needs to take but a few steps across the porch through another parallel door to shop for healthy food in another small room where vegan canned goods adorn the walls. “Our customers are world wide,” Moore said. “We have customers from all over the world and we ship all over the world.”

Upon exiting the Maplewood Nutrition and Dietary Food Shop, one needs only to take a short walk across the rocky cobbles to the Flower Café, where they can enjoy a wide variety of nutritious food prepared by owner Linda Samuel and her employees.

Samuel, who lives above the Flower Café, had a bit of a history with Maplewood Mall, and is an activist in seeing the area expand and become a bustling business block. “I’ve been at this location for about 13 years,” she explained. “But I had a clothing store down the street, and was in business there for about 20 years.”

With the premise of giving women a place to eat after an afternoon of shopping, Samuel opened the café, and noticed that her healthy food was selling better than the clothes in her second floor boutique. “We sell healthy food here. We make healthy salads, homemade soups, and baked goods. We do vegetarian, raw and vegan as well,” she said, while rearranging a display cabinet filled with various salads and breads.

Samuel, along with other business owners on the block, have big plans for the revitalization of Maplewood Mall, and hope to transform it from a quaint street with a few shops into a thriving business area. “Maplewood Mall should be a show case for the city, because it’s so much different than any other place. We’re trying to fix it up and bring more businesses back,” she said.

Jim Bear told of similar efforts. “There is a core group of business owners on the block, and they’ve started on the first steps towards coming together and getting themselves organized to revitalize Maplewood Mall,” he said. “It’s really a matter of these people organizing and acting collectively that will make a big difference.”

This article was written and reported by Jessica Lynn Argondizza, Kyle Bagenstose and Darla Synnestvedt for Philadelphia Neighborhoods, a publication of Temple University's Multimedia Urban Reporting Lab, and originally published on June 26,2010.