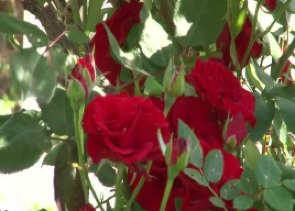 “I’m strong,” Kevon Lewis, a 7-year-old boy said as he lifted a hanging basket of petunias that is almost as large as he is. Kevon and his siblings were eager to help their grandmother with her garden during Grow This Block!, a day of community gardening that took place this weekend on West Rockland Street in Germantown.

The feeling of strength and accomplishment echoed throughout the neighborhood, as young and old picked up shovels, rakes, and plants and put down fresh roots here on their block.

Many of the other residents have lived on Rockland Street for a long time, but it wasn’t until recently that the gardening fever started.

Aine Doley, a co-block captain of West Rockland Street has “the green-thumb,” her sister Emaleigh, also a co-captain, said. Her gift for gardening seems to be infectious. The sisters said that neighbors started noticing her gardening efforts a few years ago and began expressing curiosity and an interest in cleaning up their own front yards.

Brianna Bell, a 14-year-old girl noticed Aine’s efforts. She recalled when Aine passed out free cans of soda to encourage neighborhood children to recycle, and when she helped save a litter of stray kittens that was born under a nearby house. “She does a lot to help the environment,” Bell said.

One of the community’s recent projects was cleaning up their three abandoned lots. They tackled the project during Philly Spring Cleanup. Emaleigh recalled one of the lots that she said contained over a hundred bags of dog feces. The neighborhood came together and now these lots are empty patches of green grass, which a neighbor tends to regularly.

“These lots could be dumps,” Emaleigh said, “But look, they’re not.”

The Doley sisters said that these lots are their next project. “We hope for more someday,” Emaleigh said.

However, they see a big difference between community gardens, such as those that could be placed in these lots, and community gardening. Grow This Block! is unique in that it allows neighbors to work on their own yards and beautify their lives, specifically. They are able to improve their living space and take pride in their homes and the community as a whole.

As neighbors work on their own horticultural visions, they swap ideas and plants. Grow This Block! allows residents easier access to plants and tools, which they might not otherwise have. They received donations from Philadelphia organizations including Verizon/Fios and The Pennsylvania Horticultural society. Aine grew many of the plants in her home and they also bought some from the nearby community garden, which she is a member of.

Although gardening is new to many residents, some have been doing it for a long time. Grace Watkins has lived on Rockland Street for 16 years. Her prolific red rose bush has been with her for at least 10 of those years.

Like the community it now brightens, the rose bush came from modest beginnings. Watkins was driving by an abandoned, trash-filled lot when something red caught her eye. She climbed over piles of trash and refuse and found the plant, then just a small, thorn-covered sprout with a single red blossom. Watkins and the roses are now 10 years older and while the rose bush is extraordinarily healthy, bearing flowers well into the winter, claims the proud gardener, she suffers from bad knees and can no longer spend as much time gardening as she once did.

She’s not worried though. The next generation of gardeners is ready to take over, and the adults in the community agree that the beautification project has had a major impact on the neighborhood children. By 9 a.m., at least 15 neighborhood children were outside, helping to carry plants and tools, passing out books and playing together.

“Everyone’s been waiting for this day,” Aine said. “They’ve been asking questions and wondering about it.”

Marianna Leonard, 8, said she was helping by talking to people about the free books and giving other children temporary tattoos.

Melissa Templeton, a longtime friend of Aine, brought five-piece toolkits donated by Verizon Fios to the Grow This Block! event.

“The kids love it,” Templeton said.

“I’m so proud of this block,” Campbell said, surveying the result of all their efforts.

Almost everyone pitched in to make Grow This Block! a success. Aine and Emaleigh said they hope to repeat the event and extend their idea to other blocks. Everyone is looking forward to summer nights spent gardening, spending time together, and enjoying the fruits and blossoms of their labor.