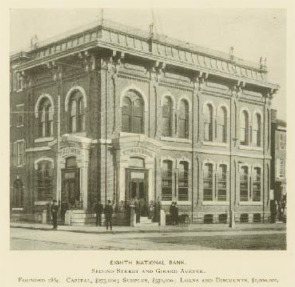 Built in 1871 as the Eighth National Bank of Philadelphia this magnificent Italianate/Second-Empire-styled neighborhood landmark was given a new lease on life with Hyperion Bank’s respect for the building’s history and investment in an historical preservation project completed in 2006.

The Eighth National Bank incorporated in 1864, commissioning this building just 5 years later, an indication of the feeling of prosperity as reconstruction after the Civil War brought industrial investment to Philadelphia. Architect Thomas S. Levy had few known commissions in Philadelphia, this being the only extant building attributed to him.

Originally just two bays by four bays, the Eighth National Bank was still an impressive neighborhood landmark, its two tall Italianate stories in red brick with contrasting limestone details. Wide, rhythmic bays divided by brick pilasters frame pairs of windows trimmed with limestone arches and sills. The building took advantage of its site on at the corner of 2nd Street and Girard Ave with a dressed stone entrance on each façade. An empire roof is supported by pairs of large carved wood brackets.

In 1906, architect A. Raymond Raff was contracted to plan an addition that almost doubled the size of the building, easily expanding it by replication of the modular bays. One bay was added to the 2nd Street elevation and two on the Girard Avenue side. By 1912, the success of the bank endorsed two further bays worth of expansion to 1207 & 1209 2nd Street. Eventually, after years of abusive alterations which compromised historical integrity and damaged its structure both inside and out, the building was abandoned.

Restored and renovated to its original use, the 11,000 square foot brick building serves as the Corporate Headquarters and first branch of Hyperion Bank, a community bank organized to serve the business and residential community in this revitalized neighborhood which borders on Kensington and Northern Liberties and is experiencing its own renaissance.

Original masonry openings were restored on the ground floor, replicating pilasters with salvaged masonry and new granite sills. Missing brackets, copper trim and soffits of the Mansard roof were replicated and the roof itself was replaced with simulated slate shingles. The oversize mahogany doors were also replicated, as were many window frames and sashes.

Inside, skilled artisans repaired and refurbished the large ornamental plaster cartouches that sit atop the windows. The four enormous arched stained glass panels that create the ceiling were dismantled pane by pane, numbered, cleaned, repaired and put back up. Skylights over them were sealed and back-lighting was added.