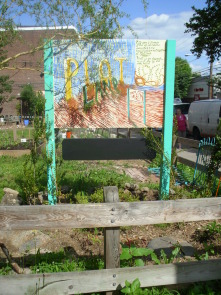 In Spring 2011, a group of neighborhood activists—both students and non-students alike—created a community garden out of a vacant lot at the edge of University City and named it Plotland. Ten years before, in 2001, a house here at 237 S 44th Street collapsed—this because it was built on an unstable foundation where the old Mill Creek had run until the late 1800s. This project in “Guerilla gardening,” imagined and led by Amanda Sebald and Geraldine Lavin, therefore, is particularly appropriate in that it attempts to “Fill-a-place,” as one volunteer aptly joked. Plotland now functions as a green space where anybody in the neighborhood can grow plants and food, play tetherball, or just relax.

Across the Schuylkill River and in virtual isolation from the rest of the City, West Philadelphia in the early 1800s was a place of farmland and woodlands, the location of wealthy estates of the Protestant elite and the isolation and treatment of the insane at places like Old Blockley. Yet over the course of that century its population grew. The development of horsecar rail-lines in the 1860s and 1870s, the completion of the Chestnut Street Bridge in 1866, the 1876 Centennial Exposition that attracted many visitors to the scenic area, and finally the completion of the Market Street Elevated Train in 1907, contributed to the arrival in droves of working and middle class families. Mill Creek, the waterway running North to South into the Schuylkill, which drained West Philadelphia and provided power for mills at Gray’s Ferry, was diverted into an underground sewer to make way for this development. The project lasted from 1869-1894.

Though the corner of 45th and Walnut was still a potato field in 1903, numerous row homes were erected at the turn of the twentieth century on the land through which Mill Creek used to run. Build on unstable foundations, a number of these houses either collapsed throughout the century or were so structurally compromised that they were demolished. A few properties between 43rd and 44th and Walnut met this fate, as did an entire block at 49th and Brown Streets, which, similar to Plotland, has become the Mill Creek Urban Farm. The house at 237 South 44th Street, built at the same time, was a looming structure with a prominent Victorian tower. Yet it became another one of the city’s estimated 40,000 vacant lots when it collapsed in 2001.

Thanks to a group of dedicated volunteers who reside in the neighborhood, it is vacant no longer. A sign hanging above the newly planted garden reads, “[t]his is a battle for community cohesion.” According to Sebald, a student of Urban Studies at Temple University who has lived in the neighborhood for three years,

Our intention for the lot is to be a community gathering space where people can come and have lunch or meet a friend instead of going to a coffee shop. We can just enjoy a patch of nature. It can bring the community together in a way that coffee shops don’t .There are a ton of coffee shops in Philadelphia, but you don’t necessarily go to a coffee shop to meet new people. I guess that’s what bars are for, ha, but I think it’s a very cool thing to be able to join in working in a garden and have the same goals.

Therefore, in a very physical sense, Plotland represents a battle over space. For one, its greening represents a return to its earlier usage as farmland. The sign which hangs above Plotland also reads, “This is battle against scarcity of space, wasted resources, and environmental abuse.” Sebald maintains that “guerilla gardening means gardening on a space that you don’t own, that you have no legal right to. It’s just taking it upon yourself to make it useful in a way. I mean, I think it is a statement: this lot is valuable …it’s a good opportunity for some of the neighbors to turn it into something better.”

Yet its very existence is evidence of more recent change in the neighborhood. Since the 1970s, University of Pennsylvania’s has expanded and, with it, a growing transient population of students. Sebald spoke further to this claim, stressing that Plotland could be a remedy for community disunity.

Our goal is that we grow food and that we use the space, or create a space that aids the community’s growth and unity. Because we live so close to Penn and because Philadelphia has a huge percentage of students, yeah, I recognize that as part of the reason that communities here aren’t as tight. There are a lot of people who aren’t as invested, because they come to go to school and they leave. But there are people who live here and who live in the city who want a stake in the community or even just want to grow their own things and this is an opportunity. That really does play towards the people like me and a lot of the volunteers, as well as some of the families who say, “Hey we live in an apartment. Our dogs can run around and our kids can play tetherball at Plotland.”

There are so many people that have met each other through the garden and through the same kind of vision. I think that it’s been very helpful that we’ve had families come and volunteer or just bring their kids. We just put up a tetherball, so that’s been an attraction for a lot of kids lately, and some families’ kids come every afternoon or every night to just water plants. Because of that we know each others’ names—that would have never happened beforehand. There is a certain generosity in the garden as people want to donate their time, their resources, and their labor for the benefit of everything there. It’s been amazing, the reaction we’ve gotten from the community.

Though the group cannot plan long-term because they do not own the lot, Sebald believes that all the community participation shows that Plotland might continue even after many of the volunteers who created it are gone. Sebald plans to propose leasing the land from University City Housing in the near future. “I think we want to see if we can ultimately lease the land from them until they sell it and be able to have full approval. This way we can really take on expanding and taking more ownership in a real sense rather than just pretending like we have the right to do that.” She closed: “When everybody’s working towards the same goal, it’s an easy way to meet people. Especially when it’s acknowledging the fact that, hey we all live here, and we all want this.”