Our Lady of Angels/ "49th Street": An Interview with Anna Appolonia Mandell 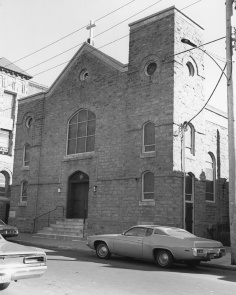 An empty church building, formerly the heart of Our Lady of Angels parish, sits at 50th and Master Streets. The last mass was held there in late March 2011. Yet the church, erected in 1907, still reminds many residents of the small and close-knit Italian community in a neighborhood just north of Mantua and west of Parkside known to those who lived there as “Our Lady of Angels” or just plain “49th street.” This Italian pocket, according to former parishioner Anna (Appolonia) Mandell, was so self-sufficient and isolated that “it was just like one big family. That sounds so cliché, but it’s true.” Mandell grew up at 49th Street and Lancaster Avenue in this “little Italy,” where Our Lady of Angels parish attended to the material and spiritual needs of the community for nearly a century.

Situated directly west of Fairmount Park and the old Mantua Yard of the Pennsylvania Railroad, the neighborhood developed heavily in the period after the 1876 Centennial Exposition, Philadelphia’s largest and greatest celebration to date. West Philadelphia, the first streetcar suburb in the city, attracted working and middle class Philadelphians who could now easily access the rest of the city. At first, German and Irish immigrants moved into newly built homes in blocks that were once reserved for the large estates of the upper crust. Subsequently at the turn of the twentieth century (1880-1920), Philadelphia received a great number of Eastern European Jews and Italian immigrants, some of whom settled in West Philadelphia. Many of those Italians formed an enclave they called “49th Street.” Its boundaries were the small triangle from 49th to 52nd Streets between Girard Avenue and Merion Avenue. Roughly 200 Italian families were squeezed into that tiny pocket by 1915.

Mandell and other former parishioners recall that their parish was borne out of hardship: they had to carve out their own space in West Philadelphia. There was friction between the incoming Italians and the Irish Church, Our Mother of Sorrows, at 48th and Lancaster Streets. Upon arriving, the Italian immigrants had to worship in the mortuary chapel of the Cathedral Cemetery. This “annex” model was a common solution to what many in the Church were calling “the Italian problem,” and it was used in various parishes at the time.

Linguistic and cultural barriers between established Catholic Churches and the incoming Italians helped bring about this tension. First, the Irish controlled the Church hierarchy in Philadelphia at the time. Their perspective is indicated by a 1907 issue of the Catholic Standard and Times (the official diocesan newspaper), which called the Italians a “highly sensitive people,” who “hesitate to attend the churches of the English-speaking congregations.” According to diocesan historian Richard Juliani, sometimes it was as simple as the fact that many Irish Catholics did not like the newcomers. Finally there was the “frequent charge [by the Church in America] that Italians had to learn to contribute.” Not only were Italians coming from a place in which religion was state-supported, they were extremely poor and were soon expected “to finance the development of new Churches rather than already-established parishes.”

Many former parishioners of Our Lady of Angels learned the story from their parents: after being ostracized from Our Mother of Sorrows, they erected their own church with their own hands and money. Juliani states, “as part of an attempt to supply national churches in various parts of the city for this swiftly increasing Italian population, Archbishop Ryan established a parish for ‘Italian-speaking people (and those of Italian ancestry) who lived within the following boundaries: from the Schuylkill River at Baltimore Ave. west to 56th St., to Haverford Ave. to 57th St. to Lancaster Ave. and westward’.” Indeed, between 1903 and 1917 sixteen Italian national parishes were established within the present-day boundaries of the Archdiocese.

All of our culture, all of our ways, everything we did it was right there in the neighborhood. We were in the pocket. It was all Italian. There may have been an Irish family interspersed here and there. Once you left that pocket it was predominantly Irish. There were probably some Germans, but we were very isolated, if you know what I mean.

Of course there were exceptions. Almost one third of Our Lady of Angel’s families lived around 40th Street and Girard Avenue. And, during her childhood, Mandell remembers that “[t]here was a select few Irish kids that we kind of allowed into the pack to hang with us—a couple from St. Gregory’s, a couple from Our Mother of Sorrows that were true 49th street people but didn’t go to Our Lady of Angels. How they infiltrated, I don’t recall, but they were nice people,” she chuckled.

After Our Lady of Angels grade school, Mandell and the other girls from the neighborhood attended West Philadelphia Catholic High School for girls. “I really say we were isolated, because it was only when I went to high school that I made friends who weren’t Italian. It was kind of like a culture shock almost to go with Irish, black, German, and Polish girls.” She further recalls that when residents of the neighborhood branched out, they typically had an affinity for other Italian communities in South Philadelphia and Overbrook.

According to Mandell, the parish and the surrounding Italian stores, restaurants, luncheonettes, and bars, made up the social life for the Italian families of the 49th street enclave. “You didn’t need a car,” she recalled. “Everything was in the neighborhood, so my parents never owned a car.” Mandell’s father worked at Sunray Drug store, while her mother worked at a nearby tailor shop. She continued,

52nd street was a strip of stores. Between Girard and Master was much like 52nd and Market [another shopping center in West Philadelphia]. My uncle had a luncheonette there…There was a furniture store, a drug store, a shoe store, a jewelry store, and a ‘5 and 10’. We went downtown only when we needed something that couldn’t be gotten on 52nd street.

The school, established in 1925, remained open for 50 years. Mandell’s father attended in the late 1920s as she did in the 1950s. In addition to parish organizations like the choir and the St. Joseph Society, the parish had such things as a Bowling League and Boy Scouts throughout most of its existence. During the period 1950-1968 under Father Lazarro, when the parish reached its peak in membership and emerged from financial troubles that had plagued it since its inception, it purchased and converted a nearby house at 4996 Master Street into a parish library. Soon, this building was repurposed into a parish credit union. At the same time, the parish converted an old police station across the street into a school yard and a basketball court for the students.

Starting in 1977, the Our Lady of Angels parish started an annual Festa, or carnival and street procession, on 50th and Master Streets to honor St. Gabriel of the Sorrowful Mother, St. Nicholas of Bari, and St. Medio. According to one parish historian writing in the early 1980s, “it is the annual Festa, which truly forms a link with the traditions of the ancestors from ‘the old country’.” Mandell recalls one aspect of the Festa: a game called “Greasy Pole," where "a pole was lathered with grease. Up at the top they’d have Salami and other lunch meats, all tied up, and usually the male kids would try to shimmy up the pole to try to grab them.”

By 1981, the parish could boast that it had baptized over 8,050 people since its founding and held over 2,380 weddings, but the number of parishioners dwindled, as the Italians left the neighborhood in large numbers. Long after the Italian community left 49th Street behind, devoted parishioners kept the Church going. Eventually those who still attended were the oldest residents who stayed behind or those who visited from afar. Until the Church closed in 2011, early Sunday mass was still said in Italian to cater to the parish’s aging population.

It was the end of an era…The only thing I can tell you is, I wouldn’t have traded it for the world. It was the best. My girlfriend and I have discussed this a lot, you know when we were growing up in that neighborhood, we thought we were special, but I didn’t realize how special we were, because I’m older now, and you meet different people every day, and apparently 49th street has a reputation, a good one so to speak. People ask where you’re from, and you say ‘49th street.’ They say ‘oh, 49th street’ and smile. We thought we were just kids growing up, but it was a special time and a special place. It makes me light up.