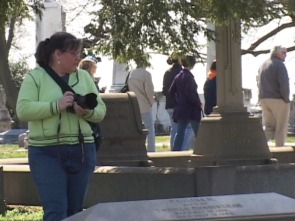 What would you do if you weren’t able to find where your daughter had been buried the other day because the rain had erased all of the marks of a new grave?

The horror of burying one’s child is hard enough on any parent, but the added devastation of being unable to identify the burial place would shake anyone.

That’s what happened to John Jay Smith in the early 1820s and led him to open the first rural cemetery in Philadelphia, located at 3822 Ridge Ave.

“John Jay Smith buried his 5-year-old daughter who died of scarlet fever in Philadelphia in a Quaker meeting ground. Back then, those grounds had no markers,” explained Carol Yaster, the board president of the Friends of Laurel Hill.

She explained that Quakers did not use any markers in their graveyards for modesty. Yaster continued that it was well known to the grave diggers back then that “the soil would pretty much hold water like a cup, so you would have to stand on the coffin to make it sink.”

So after a night of rainfall, “John Jay comes back and he can’t locate the grave because there are no markers,” Yaster said.

It was this very moment when Smith understood that something had to be done about the graveyards in Philadelphia. The overcrowding and the lack of regulation caused the population to avoid any type of burial grounds for fear of disease.

“In Philadelphia, as land became more valuable, well, dead people didn’t have rights. They would dig them up and put them in pits. In some cases, they just built on top. There are projects in Philadelphia where they still come across remains,” Yaster said.

The only solution that Smith saw was to construct a rural cemetery just like the one that had been built outside of Boston in 1831.

Rural cemeteries were the first of their kind. It was built outside of the city on a sprawling amount of land with a manicured landscape. It was quite a contrast with the disease spreading lots contained in the ever expanding cities, Yaster said.

Laurel Hill Cemetery was opened to the public in 1836. Smith eventually did find his daughter and “had her reburied in Laurel Hill,” Yaster said.

“The cemetery was more than just a place where the dead were disposed of,” Yaster said. “It was supposed to be a garden where people could come to and see excellent sculpture and the best in landscape.”

But the cemetery's popularity didn’t pick up immediately.

Yaster said, “There was a mixed reaction at the beginning…due to the Great Depression of 1837. So people weren’t really buying cemetery lots. But once it caught on, it was like a steamroller going forward.”

It was only after a couple years of expanding its land and reinterring bodies that the cemetery became the place to be seen at.

“They came to stroll,” Yaster noted.

In fact, Philadelphians would actually come out to enjoy the cemetery. This was the first garden cemetery and public space that the city could enjoy.

“There were no parks in Philadelphia at that time. This was it,” Yaster said.

People would even picnic at the cemetery until 1852. Yaster believes that the mess left by picnickers left the managers no choice but to ban food from the grounds.

Most Philadelphia public squares had been used as hanging grounds or potters fields. This was the first public place where visitors could enjoy beautiful sights of flowers, trees, and sights of the Schuylkill.

“Reportedly, even Edgar Allen Poe would come by. Even though he never signed in, we can tell that he had at least seen the cemetery by reading his poem about the Wissahickon,” Yaster added.

In the years that followed, the cemetery was praised in many local and national newspapers. It was even featured as a tourist attraction for those new to Philadelphia, Yaster pointed out.

It even became a date-friendly venue.

“Elisha Kane brought Meggy Fox here to propose to her in a very Victorian way. It was described as their hearts beating like drums to the grave. He then gestured to the family grave and said, ‘One day Meggy, we’ll both lie here together,’” Yaster said, laughing.

Laurel Hill’s popularity resulted in the cemetery being packed with the who’s who of Victorian Philadelphia.

But the 20th century meant a downturn in business and the upkeep of the cemetery. Drug use and crime invaded the burial grounds as some monuments fell into disrepair. It wasn’t until the 1970s when the Friends of Laurel Hill Cemetery was established as a nonprofit to help return Laurel Hill around to its former glory.

Alexis Jeffcoat, the development and program coordinator at Laurel Hill, explained, “We didn’t have a full-time employee

until five years ago.” Now the cemetery has only about a handful of employees, but it is finally beginning to gain back some visitors.

The cemetery has begun to grow its roots out into the neighborhoods that surround it, Jeffcoat explained.

“This place is stable, buildings have been torn down and the neighborhood changed. But this is a park that you can still jog and walk through.”

This year is the most active for the cemetery so far, allowing for events practically every weekend.

Jeffcoat said that the best way to really sum up what they’re doing now is in the words of one of their tour guides. “We’ll give the tours until he’s in the tour.”