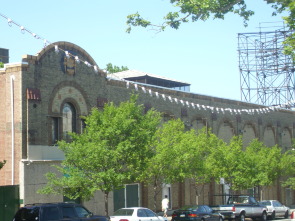 At the Southeast corner of 43rd and Walnut (4228 Walnut Street) stands the Masjid al-Jamia Mosque. When it was set up by the University of Pennsylvania’s Muslim Student Association in 1973, it was quite distant from the college campus. Today, the reality is that University of Pennsylvania campus police are now stationed all the way up to 43rd street, evidence of University of Pennsylvania’s expansion westward in recent decades. The building, somewhat ironically, was originally constructed in Spanish Revival/Moorish style by the Ballinger Company in 1928 as the Commodore Theater. The movie theater, which could seat upwards of 1,400 viewers, satisfied the entertainment needs of a rapidly growing middle and working class population, which entered the neighborhood in droves upon the completion of the Market-Frankford Elevated Train Route in 1908. Since then, communities have moved in and out, and while the mosque is a symbol of this ever changing social landscape, it has also provided a degree of constancy not otherwise seen in the space at 4228 Walnut Street over the course of the past century.

Prior to 1872, west of 42nd Street was still farms, woods, creeks, and the occasional inn. Though the extension of the horse-street car line in 1872 caused greater development west of 42nd street, as late as 1900, the corner of 45th and Walnut was a potato field. In West Philadelphia the well-to-do suburbanite (and his mainly Irish servants) resided in fresh air, removed from the Center City, which could be reached via the streetcar. Even into the 1880s, Mill Creek still flowed southwards through what is now the center of the block between 43rd and 44th streets. Yet suddenly with the completion of “the El,” numerous row houses with their characteristic front porches were built for the incoming and predominantly white middle and working classes.

The Great Depression and World War II saw the mass exodus of whites, or the phenomenon known as “white flight,” coupled with the incoming African-American population from the South known as “The Great Migration.” West Philadelphia’s white population had shrunk from over 250,000 in 1920 to less than 50,000 in the year 2000, while its African American population had gone from less than 25,000 to roughly 150,000 during that same time. A couple decades later, immigrants arriving from Africa and Southeast Asia continued to change the face of the area west of the University. As these changes were occurring, Commodore Theater closed down in the 1950s and was reincarnated as 43rd Street Theater for live performances in the early 1960s. By 1964, its use as a theater was discontinued and it was repurposed as a Church: the Miracle Revival Tabernacle. By 1973, Masjid al-Jamia began to use the space and has remained in it ever since.

Today, this vibrant mosque is the 3rd largest in the City, and reflects both the increasing ethnic diversity of the neighborhood as well as University of Pennsylvania’s active involvement in changing it. Masjid al-Jamia is attended by various members of the surrounding area, including “the young, the elderly, the working-class, the immigrants, the African Americans who have been practicing the faith for generations,” as well as, though less often, by Muslim students from the University of Pennsylvania. “During Ramadan, almost 300 students make the trek every day to Masjid al-Jamia,” according to the Daily Pennsylvanian.

Masjid al-Jamia’s members have been active in neighborhood affairs. In 2003, they successfully and controversially protested the relocation of a state liquor store onto the site of a Rite-Aid that had recently shut down at 4237 Walnut Street. Most recently, the mosque has made the news because of the controversy started by a number of missionaries of Repent America, a Philadelphia Christian group, who in summer 2010 were detained and accused, though not convicted, of both disorderly conduct and obstructing the front door of the Mosque while proselytizing, or perhaps, heckling the Mosque’s worshippers.