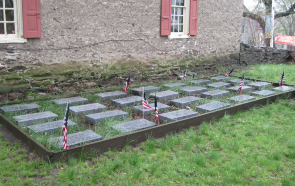 In colonial and early America, it would have been hard to find a place where people of all races, religions and social statuses were treated as equals.

That wasn’t the case, however, at Germantown’s Upper Burying Ground, for at least a portion of its existence.

When the cemetery was first opened in 1693, it was available to all regardless of race, creed and financial status. "Blacks, whites, Native Americans, different populations, Germans, later on Irish, were all, we think, buried here,” said John Pollack, president of the Concord School House and the Upper Burying Ground.

But that soon changed. In 1776, the Trustees of the Burying Ground rejected a request for a black child to be buried in the cemetery and soon after a regulation was passed that banned the burials of all “Strangers and Negroes and Molattoes” in both the Upper and Lower Burying Grounds. “This is sort of an odd and sad story about increasing segregation in this area,” Pollack said.

African-American residents were buried at a separate site on Bowman’s Lane in Lower Germantown.

The Upper Burying Ground was established when the Corporation of Germantown set aside two, one-acre pieces of land given by Paul Wulff, now known as the Upper and Lower (Hood Cemetery) Burying Grounds.

The cemetery, located at 6309 Germantown Ave., is believed to be the final resting place of over 1,300 people. There are just over 300 tombstones in the cemetery at this time, however, meaning many of the graves are currently unmarked. Some of the unmarked grave sites may be those of children.

There were “many, many children because through most of this period, certainly through early America, the infant mortality [and] child mortality rate was pretty high, so there were lots of children buried here,” normally without a grave marker, Pollack said. Other unmarked graves belong to those whose families were too poor to afford a stone.

According to burial records obtained by the Concord School House and Upper Burying Ground board, among the notables buried without a current marker are the child of the schoolmaster who died in 1759, a stranger from England who died from drinking cold water on a very hot day in 1818, and a young girl named Susan who died after drowning in the Wissahickon.

Some burial records only identify the deceased as “stranger.” It is believed that those individuals were “newcomers or visitors or immigrants to the community that may have died of disease” quickly after arriving, Pollack said.

What the Upper Burying Ground is arguably best known for are the Revolutionary War soldiers who are buried there.

“On the October day in 1777 when the battle of Germantown was raging up and down the street here [Germantown Avenue], a number of those killed were buried right here in our cemetery,” Pollack said. The known casualties of that battle buried in the cemetery include three officers and six soldiers.

There are more than 50 veterans of the Revolutionary War in the Upper Burying Ground as well as a few veterans from later wars. Most of the veterans died from non-combat causes.

In recent years the Sons of the American Revolution, a group of male descendants of supporters of the American Revolution, has helped raise money to set aside a separate area to honor the soldiers who have unknown burial places within the cemetery. There is a plot of land that has 28 closely placed tombstones for those soldiers whose graves were never clearly marked, if at all.

“We occasionally erected new headstones in the burial yard at known sites but where there were no surviving stones or where the stones would have been very decayed we put up some new headstones as well,” Pollack said. “This is a way of marking the memory of the Revolutionary War soldiers who fought there.”

The first formal list of the grounds' burials was kept in 1756. All evidence of burials before then comes only from tombstones. The earliest known burial that took place was that of Cornelius Tyson (Teison), one of the first Germantown settlers, in 1716.

The cemetery remained active until the early 20th century, sometime around 1930, Pollack said.

The Upper Burying Ground is home to some of the more important early residents of Germantown. Jacob Knorr, the builder of the Concord School House that is attached to the cemetery, is buried there. As is Zachariah Poulson, a publisher who in 1800 purchased what came to be known as Poulson’s Daily Advertiser, the successor to the first daily newspaper in America.

“None of these are necessarily household names anymore, but they were prominent citizens and families at the time, and it suggests [that] this wasn’t just a place for the poor to be buried,” Pollack said.

Repair and upkeep of the ever-aging cemetery is difficult, especially with limited funds. “The same board that runs the schoolhouse runs the burying ground so that requires an entirely different set of questions and skills,” Pollack said. The board has to deal with things such as landscaping and maintaining decaying gravestones, the 18th century stone wall that is on Germantown Avenue, and necessary repairs at the school.

Just like the school, which has seen a few break-ins in recent years, the cemetery too has had some run-ins with vandalism. In some cases, people have attempted to knock over gravestones, sometimes successfully. “Part of our job here has to be to hopefully get the neighbors to work with us to help prevent those kinds of situations as best we can," Pollack said. “We want to get to know folks around here so that they can help us do that and help us keep an eye on the place just as we do.”

This article was written and reported by Max Webber and James Riggio for Philadelphia Neighborhoods, a publication of Temple