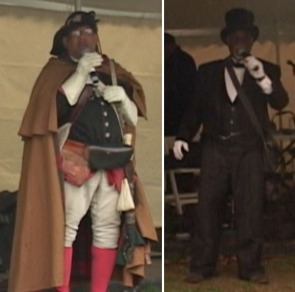 “Fest for the Quest” is an annual collaboration among Historic Germantown and students from Germantown High School and Germantown Friends School. The two highlights of this event are the open forum “Germantown Speaks” and the open-air festival “A Great Day On The Great Road,” both of which take place at Vernon Park, located at 5818 Germantown Ave.

“The great spine of the community is Germantown Avenue and it used to be known as the ‘Great Road,’” said David Young, executive director of Cliveden, at Germantown Speaks. "And you could talk about the preservation of these houses and the stories of Germantown history as a testament to the efforts to keep making the avenue great, and the fact that we all have stories about the avenue because it is the longest colonial national historic district in America [at] two miles long. “

The festival’s history dates back to a long tradition of intermittent celebrations held in Vernon Park following the American Revolution, “Not only would there be one week long festival in Vernon Park to celebrate [the] German founders of Germantown,” Young said, “but two weeks later there’d be a festival celebrating the Revolution or the industry, and then there’d be another festival celebrating the descendants.

“1928 represents a really interesting change from how the past was remembered in Germantown,” Young said. It was that year that members of the Colored Young Women’s Christian Association decided to have a festival celebrating the African-American residents of Germantown. The organization named it “Negro Achievement Week,“ which Young cites as the true inspiration for Fest For The Quest. These women gathered support from local schools for the event, which attracted such illustrious participants as Alain Locke, often called the “father of the Harlem Renaissance,” Young said.

“To have an African-American achievement week, which was the forerunner of Black History Month, in this neighborhood, not in Center City, West Philly, North Philly, was really exceptional. Negro Achievement Week had the same pattern of a week of activities: art, music and literature…in Germantown, on the avenue, which was segregated!”

Young’s theory for why this event became such a hit was that, as late as the 1940s, the Ku Klux Klan had a larger presence in Germantown than any other part of Philadelphia with roughly 1,200 members. “I have to think on some level that the efforts of a progressive organization like the Colored YWCA had something to do with countering [the KKK’s presence in Germantown],” he said.

The resistance from groups like the KKK when it comes to remembering and celebrating Germantown’s history is an example of something Young calls the “Watson paradigm.” John Fanning Watson was an analyst who in the late 18th and early 19th centuries became renowned for gathering oral histories from community members about life during the Revolutionary War.

“It’s to his credit that we know a lot about the way Germantown was remembered,” Young said. “It’s also part of the problem, because he was a very conservative, bigoted individual and he thought only the Revolution mattered. As the neighborhood changed he fought to take that all down. That was in 1832. His attitude was that the past was better than the present.”

While the 15 historic sites that make up Historic Germantown are dedicated to keeping a comprehensive, unbiased record of Germantown’s past, they don’t always work well together, nor do the 52 neighborhood associations or 93 churches in the area, Young said.

Still, there’s a lot of potential for collaboration in an area with such a rich history to uncover. “It’s a really powerful place,” Young said, “and a historically rich neighborhood with connections to industry, politics, art and music. We’re right in a tough neighborhood where all this affluence exists along with poverty.”

At Germantown Speaks, attendees were invited to speak about the role and history of arts in their community. Mary Ann Lancaster-Tyler, ethnomusicologist and longtime resident, taught music in Germantown for over 35 years. “When the Pinkett Middle School opened up in 1970,” she said, “we were blessed to have wonderful music teachers. I was one, who had just come off the road with Duke Ellington. […] Young folks in this area have been touched by talent they’re not even aware of.”

For Lancaster-Tyler, preserving the arts in Germantown comes down to having the funding to keep arts in the schools. “We don’t want to make this political,” she said, “but you can’t help it. As [Philadelphia] goes through these budget cuts, I mean, if we really want our kids to survive in a positive way, we can’t take the things that motivate and inspire them away, and then say ‘well, you’ve got to go’ and ‘you can’t cut class’ and ‘we’re gonna do truancy, and arrest…’ because they want to have a reason to be there in the first place…to me there’s not a dividing line between the academic and the arts, because to me they’re interwoven.”

This article was written and reported by Max Webber and James Riggio for Philadelphia Neighborhoods, a publication of Temple University's Multimedia Urban Reporting Lab, and originally published on April 27, 2011.