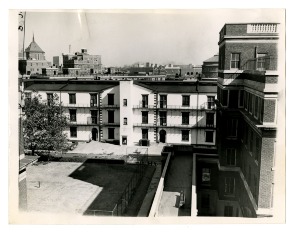 At the Southeast corner of the University of Pennsylvania’s campus in University City, where the Children’s Hospital of Pennsylvania and the Veteran’s Hospital are located today near 34th Street and Civic Center Boulevard, was Philadelphia General Hospital, formerly known as the Philadelphia Almshouse, or just “Old Blockley.” This public institution, like New York’s Bellevue Hospital Center, was a space for the poor, the sick, the elderly, and the insane—in other words, those individuals who private hospitals have always turned away. Because of the nature of its work and the associated issues of class and race, it has always been surrounded with a sort of moral ambiguity. Despite this, by the early 20th century it was considered one of the great municipal hospitals in the world. Yet after functioning as a space for Philadelphia’s poor for 250 years, it was shut down by the Rizzo administration in 1977.

Some argue that Philadelphia’s reputation as a great medical center originated with the tradition started by the Philadelphia Almshouse. Originally built in 1731 at 3rd Street and Spruce Street by the Quaker group, Overseers of the Poor, it predates Independence Hall and the Liberty Bell. Due to the fact that that the almshouse contained a hospital department prior to the creation of Pennsylvania Hospital in 1751, numerous historians have argued that it was the first hospital in what would become the United States.

In 1765 the Overseers moved it from its original location to 9th and Spruce Streets in order to distance it from the developing city. By that time, many called it the Bettering House, or House of Correction. Yet in the antebellum period, the extent to which it was an institution that actively sought to reform individuals, as opposed to merely confining and isolating them, is questionable. Benjamin Franklin stated that the “House of Correction was the only place in which the lunatics of the city might be confined and that it was by no means fitted for such a purpose.” And the city continued to develop South and West in the early 19th century; according to a former doctor, “the noise of these creatures bereft of reason, howling like caged beasts, exerted not only an unpleasant influence on the sick, but even shocked the public ear.” The Almshouse needed to be moved to isolation once more.

In 1832, it was relocated to its final spot in West Philadelphia, which prior to the City’s consolidation in 1854, was Blockley Twp. Though poised to become the City’s first streetcar suburb, West Philadelphia at the time was still rural. It was a space, like that of Eastern State Penitentiary simultaneously being built in Fairmount, where the city fathers felt they could simultaneously remove, confine, punish, care for, and reform, the city’s population of poor, indigent, and “lunatick” members. Interestingly, Old Blockley’s architect was none other than William Strickland, one of two main designers of Eastern State Penitentiary.

Old Blockley, which was comprised of an almshouse, workhouse, charity school, hospital, and lunatic asylum, was also like the penitentiary in that it was influenced by that facet of Enlightenment thought which stressed the malleable nature of man. Theoreticians felt that by isolating individuals and subjecting them to strict regimentation, they could be worked on and remade by both doctors and missionaries, to conform to the image of health, industry, and morality, to which their educators subscribed. Importantly, these theorists stressed the need to do away with corporal punishments and to get the idle poor working.

Yet despite the aims of these Quakers in high standing, theory and practice were often out of sync at Old Blockley. The same former doctor quoted above, who served there shortly after the Civil War, told a chilling story, which reveals the staying power of corporal punishment:

The management of the insane department at the time of my service was devoid of medical knowledge and humanity as was possible, and there, as also in institutions that falsely laid claim to being pioneers in the humanitarian treatment of the insane, cruel repression took the place of rational and humane management. I have still vividly in my memory pictures of raving maniacs in straight-jackets strapped to their bedsteads or… [in] not the least horrible of these inquisitorial mechanisms…the doomed lunatic…[was]bound to [a] massive chair…[his] head supporting a capacious box of ice, which melting, poured its chilling contents adown his person for hours together.

In his reminiscences, he also described techniques that did little to combat idleness,

I still see before me the narrow shelterless yards of the hospital filled with a mingled crowd of gibbering lunatics, many of them wearing leather muffs, while others wandered in melancholy vacuity around their narrow prison—with nothing to occupy, nothing to amuse, nothing to improve them.

Finally, the facility was often overcrowded and unable to provide decent beds and food (rotten eggs were often on the menu). Still, it was better than nothing: Old Blockley represented one of the few places the poor and indigent of Philadelphia could find some kind of shelter and relief.

From the start, famous doctors worked at the Almshouse—including Benjamin Rush (who was also very much interested in social reform). Doctors, such as e Rush, Thomas Bond, and William Shippen, developed new techniques to deal with such issues as overcrowding: outdoor care, the predecessor to outpatient care, for instance, involved doctors working on patients under the shade of trees. This practice was continued for over a century.

With the combination of famous doctors and poor patients stricken with ailments uncommon among the middle class, Old Blockley became a teaching hospital famous all over the world. University of Pennsylvania and Jefferson hospitals considered making it a requirement for their students to attend lectures there. Until 1860 (when the practice ended), students, and other observers paid for 8-dollar tickets to see lectures and demonstrations. However, some contemporaries found this practice repugnant. According to the same Civil-War era doctor:

It was visited for the most part by sightseers, attracted by the same motives as one visits an exhibition of animals. The hallucinations and eccentricities of these poor God smitten creatures were the subject of thoughtless sport…It was a burning shame on the good name of this Christian community.

And it became famous not just for the study of its live inmates but for its post-mortem studies, for which “[e]arth at Potter’s Field, where Franklin Field now stands, was rarely unturned.”

As referenced in the doctor’s testament, physicians and students often viewed their subjects/inmates with contempt—as beasts, or worse, objects to be manipulated for “the good of science.” According to one historian, “[t]he fear of being used as ‘clinical material’ obviously affected almost every patient suffering from anything but the most routine ailment.” Not surprisingly, the bulk of inmates had been immigrants and African-Americans (who, along with venereal patients, were treated the worst, being sent to live in the attic when space was running low). In 1892, roughly 60% of the patients were immigrants, and there was a 3 to 2 ratio of black to white inmates. Moreover, the almshouse and hospital was always considered a last resort by the “working poor,” who did not wish to carry the stigma of pauperism.

In the 1880s, after improvements in such areas as lighting and sanitation, and with the addition of a new school for the training of nurses in 1885, Old Blockley developed a reputation as “one of the great municipal hospitals of the world.” With the help of a wealthy businessman and philanthropist in A.J Drexel, the hospital found and hired Alice Fisher, a student of Florence Nightengale, to head the nursing school. According to historians Stachniewicz and Axelrod, “when well-disciplined nurses brought order out of chaos, beginning in 1885, the Philadelphia Hospital became a great source of pride to the city and to the practice of medicine.” Professional nurses signified a new reign of middle-class values like order and efficiency, since formerly, nurses were selected from the inmate population itself. This made the divide between patient and nurse far more pronounced. Nurses, now uniformed to separate themselves from the inmate population, were recruited mainly from middle-class, small town USA.

Soon afterwards, Old Blockley, in line with recent changes in administration, techniques, and self-image, changed its name to the Philadelphia General Hospital in 1902. In 1920, it moved its 1,400 “insane” inmates to Byberry State Hospital in the Northeast, a more remote and isolated location then West Philadelphia, which was developing rapidly in the early 20th century. It also moved its “well-poor” to other facilities in the city in an effort to become an outright hospital. This effort saw greater specialization; new “disciplines [also] included ophthalmology, dermatology, endocrinology, radiology.” In 1921, it was the first hospital to offer radiological care to cancer patients, and after World War II, it continued to see “incredible advances in techniques” and medicines. “Under the firm guidance of Dr. Pascal Lucchesi…[it] continued to be one of the most valuable training grounds in the country.”

After West Philadelphia developed rapidly with the construction of the Elevated Train route in the early 1905, many patients began to see PGH as a community hospital; in 1975, 50% of its patients were coming from West Philadelphia and many were regulars. Though it was still, in the words of one editorialist, “the city’s doctor of last resort”—in other words, a space for the poor, the elderly poor, and the “medically indigent”,—it was not limited to that function. The police and fire departments used it and it alone for emergencies. One officer recalled that “if you ever got shot, this is the place, was the place to come.” It also provided such critical social functions as special wards for rape victims, prisoners, and pregnant women with addictions.

Yet, in 1977, the Rizzo administration shut the hospital down. Rizzo claimed that the City no longer had the money (it had cost 12 million dollars to run in 1975, an amount that many observers considered quite low) or the responsibility to be involved with health care. He also argued that the cost to rebuild the deteriorating facilities would be too high (some observers claimed that politicians with an eye to shutting the facility down had allowed it to deteriorate for that purpose). Demonstrators claimed that it had been “starved by city government and bled by the University of Pennsylvania.” Yet, while the “Third-Party Insurer,”—Medicare and Medicaid—allowed some patients to opt to use private hospitals, there were between 150-175 patients who could still not afford to go anywhere else at the time of Philadelphia General’s closing; many of these patients had chronic problems that outlast health insurance like alcoholism and drug addiction (which private hospitals prefer not to accept).

The city provided 1.8 million dollars to three health clinics (two in West Philadelphia at 555 43rd Street and 4400 Haverford Avenue), in order to compensate for the loss of the hospital, while numerous other patients were sent to HUP, Presbyterian-University of Pennsylvania Medical Center, and Misericordia division of Mercy Catholic Medical Center, all in West Philadelphia. Today, Philadelphia is the only major city in the United States without a publically-supported general hospital and in 2009 faced the possibility of closures and cutbacks to the health care clinics which were supposed to replace it.