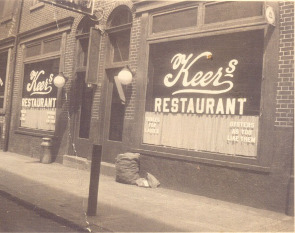 When I was a child my Grandmother Lena C. Keer operated a seafood restaurant called Keer's Restaurant on the section of Mole St. between Market and Ranstead. It operated from about 1929 to 1940. This was the last of a series of Keer restaurants in Philadelphia dating from the 1890s.

On Mole street there were two other restaurants viz., Kellys and Wagners. Mrs. Kelly's restaurant was larger and better known than my grandmother's. Often on Sundays when visiting Mole St. I would see Mrs. Kelly sitting outside her place and I would talk with her.

My grandmother had a contract to feed the juries and prisoners awaiting trial in City Hall. My uncle and father would carry meals to them and I was able to go with them on occasion.

The street and restaurants are now buried by the Center Square Building complex.