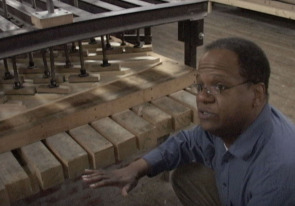 "Without craftsmanship, inspiration is a mere reed shaken in the wind.”

The above quote by German composer and pianist Johannes Brahms is exemplified by the work of Philadelphia’s oldest piano company.

The Cunningham Piano Company was started by Patrick J. Cunningham, an Irish immigrant, in 1891. “That makes us 120 years old…ish. Sometime this year we will actually announce or say that this is our 120th birthday,” said Milo Morris, Cunningham’s director of institutional development.

Morris is responsible for all of the non-residential customers. He deals with churches, schools, restaurants, hotels, concert halls, theaters, colleges, and any other organization that comes to Cunningham to purchase a piano that is not for the home. He has worked at Cunningham since September of 2008 and has been an avid piano player since his youth.

Cunningham wasn’t always located in Germantown. Up until Louis Cohen, the factory manager under Patrick Cunningham, took over in the 1930s, the company store was located at 11th and Chestnut streets and the factory sat at 50th Street and Parkside Avenue. The original factory building still remains.

“Louis made some changes, the biggest of which was moving everything up here to Germantown,” Morris said.

When Cohen purchased the store building at 5427 Germantown Ave., it had most recently been a three-story Masonic Temple. Some renovation of the building has been conducted, but that process is not yet complete.

“We were trying to put the third story into use as space for a performing arts organization and we discovered that they only have one bathroom up there. The third floor used to be their ceremonial space, and in the Masonic tradition, women weren’t allowed in there, so they really only needed a men’s room, so now we need to build a ladies’ room up there,” Morris said.

The move to Germantown quickly came with another significant change for the company. After manufacturing pianos since the company’s inception, Cohen decided to halt production during World War II and move the company into another direction.

“You have to keep in mind that back in those days there were over 300 piano companies in the United States manufacturing pianos and about 10 to 12 right here in Philadelphia alone,” Morris said. “So you got 10 to 12 competitors pumping out pianos pretty much at the same rate you are, the market gets pretty saturated pretty quickly.”

When Cohen left in the 1970s, he handed Cunningham off to his daughters Rose and Dorris. Current co-owners Richard Galassini and Tim Oliver took the company over just a few years ago.

The Cunningham Piano eventually found itself back in the marketplace. “We’ve had classical artists choose it over Yamaha and Kawai. Those are other pianos that are in that kind of strata of quality, but ours is sizably less expensive mainly because we don’t have the distribution costs that many other manufactures have,” Galassini said.

But the new Cunninghams aren’t the same. “The Cunningham Pianos that you see today are inspired by the original Cunningham Pianos from a very basic skeletal perspective, but they are actually not designed to be what the old piano was,” Morris said.

New technologies have completely changed the way pianos are both manufactured and restored, and Cunningham takes pride in embracing the advancements. “There were a variety of materials that became available to humanity through petrochemical processing,” Morris said. “Some really wacky things happened…a lot of wacky things happened with pianos, too, a lot of which never saw the light of day.”

Many of these advancements did make it past experimental stages. Tuning pins changed as a result of the rise in variety of metal alloys. Finishes, varnishes and lacquers became stronger, more consistent and more reliable.

One of the more significant changes to affect pianos has been the material that the keys are made from. In the past, piano keys were made of ivory, but a 1989 international trade ban was placed on the material.

“Using chemical engineering, the piano industry has created a number of different synthetics to use for the white-key tops,” Morris said. In some cases they mimic the feel of ivory and in others they do not. “Some people prefer to have the feel and texture of an ivory key, and that can be simulated.”

Some changes have also made the wear-and-tear of pianos a little less common. The wippen, the part of the piano that causes the rapid motions of the hammers, used to be made of wood. Over time that wood would wear down, become misshapen or break, Morris said. Now that many wippens are made of a composite material, the rate at which they break down has significantly decreased.

Although Cunningham has occupied Pine Place in Germantown since before the onset of World War II, the site has a history that goes back much further than that. More than 100 years before Cunningham moving to Germantown Avenue, abolitionist and author Louisa May Alcott, author of “Little Women,” was born on the site and spent the first year and a half of her life there.

This article was written and reported by James Riggio and Max Webber for Philadelphia Neighborhoods, a publication of Temple University's Multimedia Urban Reporting Lab, and originally published on April 9, 2011.