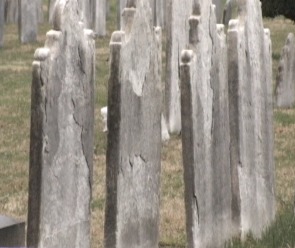 Located at 6671 Germantown Ave., St. Michael’s Lutheran Church has been around the community since 1728.

However, there are many issues concerning the preservation of the cemetery due to vandalism and weathering.

Bill Ochester, the chairman of the Cemetery Restoration and Preservation Committee, said, “Vandalism is a major problem. People are pushing stones over, but the more recent issue is the weathering of the stones. The stones are scaling and flaking.”

Ochester said the church received a Pell Grant over a decade ago to raise numerous stones that have been knocked down.

“We raised the stones, but they get knocked right back down,” Ochester said.

The cemetery is fenced in as a way to keep vandals from coming in and out. Yet Ochester said he believes it shouldn’t be that way.

“We shouldn’t fence them out. I want the community to come in and look at the stones. The answer isn’t to seal them out, but rather educate them. A lot is to be respected here and we need to educate in order for the community to appreciate what we have here.”