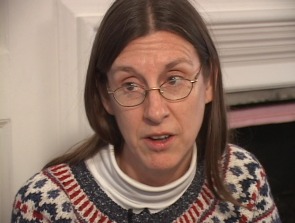 “I talk out loud as I’m closing up, just so that they know,” said Diana Thompson, Grumblethorpe’s educational officer. “That way they won’t be able to pop out and say boo!”

And the “they” she has in mind? Ghosts!

Grumblethrope, located on 5267 Germantown Ave., was a property that passed through four generations of the Wister family. But the ghoulish tales that haunt its walls originate from the death of James Agnew, a British general.

In fact, the hardwood floors upon which he bled to death were never replaced. Instead they were cleaned and sanded down, leaving traces for future generations to be able to notice. But the story doesn’t end there.

Thompson explained, “Legend is that if you’re in the house by yourself at dusk you will hear moaning.

“But that’s a theory I don’t plan on testing,” she quickly added.

She doesn’t plan on testing this theory because she has already seen and heard her share of ghosts. It all began two years ago.

“What I saw was a black shape…maybe up to my knees behind me,” Thompson said.

She described the shape moving very quickly from one room to another. She then saw it again as she was standing in the colonial parlor. But as soon as she said, “I’m not in the mood for this,” it disappeared.

It turns out she’s not the only one with ghosts on her mind. Not too long after her own experience, her son came up and asked her, “Mom have you ever seen a black shape moving really fast?” He had confirmed to her that she wasn’t the only one being haunted.

“My mom is too scared to pick me up from the house,” said Kelli Alsop, a volunteer at Grumblethorpe.

Alsop explained that one time as her mother and cousin were sitting in the car and waiting for her, they experienced something unnerving.

“They both said that they felt the hair on the back of their necks stand up…she’s like I’m sorry I can’t bring you there anymore,” Alsop said. “She won’t even come near the house anymore.”

But one of the most interesting experiences that Alsop has experienced personally was when she was walking through an upstairs room with Thompson and another woman. She explained that it was during the portion of the day when the sun pierced through the windows, casting shadows in the rooms of the house.

“You could see the shadows on the floor. Behind me, there was another shadow and it was wearing a dress. But all of us were wearing jeans,” Alsop said.

Both women have explained that they don’t feel threatened by the entities and still love to work at the house regardless of the circumstances.

But that won’t stop them from making sure to lock up a little earlier in the day to at least avoid dusk.