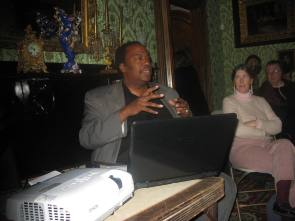 Germantown residents and visitors were privileged to learn about the stalwart black troops who trained nearby.

The free event “Saluting Camp William Penn,” which took place in the parlor of the Ebenezer Maxwell Mansion, opened the floor to author Donald Scott. He presented a slideshow and lecture on the history of Camp William Penn, the first and largest federal facility to train all-black regiments of troops during the Civil War.

“In total, my wife Billie and I found about 400 images related to this particular Civil War camp, and that was great because before we actually started this research…there was one thing that really stuck out in my mind and that was: if there were 11,000 [black soldiers trained at the camp] there had to be something out there.”

Camp William Penn stood on about 13 acres of land at about the corner of Broad Street and Cheltenham Avenue, Scott said. It was one of 18 camps training black troops in the United States during the Civil War. The one remnant of the camp is an entry passage located at Willow Avenue and Sycamove Lane in Cheltenham, Pa.

Scott is a professor at the Community College of Philadelphia. He wrote the books Remembering Cheltenham Township and Camp William Penn. His follow-up to the latter is planned for release next year.

The Ebenezer Maxwell Mansion lists events like this one on its website. The historic house and museum is located on 200 West Tulpehocken St.