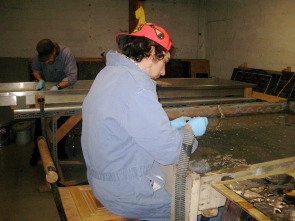 Joseph and Rita Beyer took a glass half full approach after being laid off from a struggling stained glass studio a week before their wedding date.

“We didn’t have any kids or a mortgage or anything like that, so it was a good time to go out on our own and start our own business,” Joe explained.

The Beyers established their stained glass studio in Northwest Philadelphia in 1980.

Since then, the business has restored existing stained glass, designed and created new stained glass, and fashioned window boxes to display the works of art. It had been commissioned to work for countless universities, churches and museums.

“When I started I was doing small residential projects and I wondered how it would ever be possible to make a living doing this for myself, let alone 17 other people,” Beyer noted.

Despite the tough economy, the specialized business managed to remain busy with projects.

The employees take great pride and care in seeing every project through from start to finish. “There are times that I’ll do a window and then someone else goes and installs it and I always feel cheated because I didn’t get to see it in,” studio supervisor Bryan Willette explained. “So I’ll tell them to take pictures. I really want to know how it goes."

The studio had also worked to find new homes for stained glass from churches that have closed or consolidated. Under the guidelines of the Catholic Church, the stained glass can only be used for religious purposes.

“You’re not going to walk into Houlihan’s and see it hanging over the bar,” associate Neil Cippone said. “It’s going to be used appropriately."

The studio was originally located just three blocks away in the Mt. Airy neighborhood, but made the move to its current Germantown address at 4813 Wayne Ave. in 2005.

“It’s a historic neighborhood,” Beyer remarked. "There’s an awful lot of history here and I live in Chestnut Hill, so it’s a good central location.”

When he spoke of the future, the owner and stained glass enthusiast was certain of one thing.

This article was written and reported by Melissa Nowicki for Philadelphia Neighborhoods, a publication of Temple