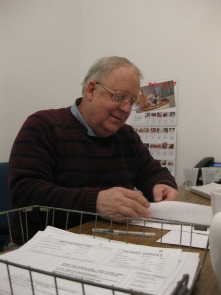 Driving down Germantown’s business corridor between 5:00 and 6:30 p.m., you’ll see nearly all the businesses putting up their metal gates and bars. They’re losing a third of a business day because they close early out of fear and lack of security.

“In Manayunk, shops are staying open 'till 11:30 p.m., midnight,” said Jim Foster, the 68-year-old publisher of The Germantown Chronicle. “Germantown is a shadow of what it used to be.”

The story of what Germantown used to be really begins back in the 1680s when Foster said Germantown had its own industry and was a “significant metropolis.”

Foster pointed out that the location of the first protest against slavery was held by the Germantown Quakers at the Germantown Mennonite Meetinghouse, which is just down the block from where the newspaper is situated.

“You’ll find that by the 19th century, pockets of all lived in Germantown,” explained Foster.

After the Civil War, “they could buy houses anywhere in Germantown. There had been black blocks since [the] 1880s. They were scattered, not condensed.”

By 1831, Germantown was the first area to be connected by passenger car to Philadelphia via the Baldwin Locomotive Works.

“It went to Ninth and Greene Streets to Germantown Avenue and Price Street. That same rock bed is where the R7 travels on,” said Foster.

“When they decided to build an experimental train,” he added, “they decided that Germantown was the place to go.”

Even though Germantown had been a suburb of Philadelphia, it still continued as its own city after being incorporated into Philadelphia in 1854.

“It operated autonomously,” Foster said, “having its own City Hall rebuilt three times.”

In fact, Germantown was hustling and bustling as much as Center City did at the time. Soon enough there were two competing train lines bringing others into Germantown.

“A lot of people shopped in Germantown up to the ‘60s rather than Center City,” Foster explained.

“The downhill momentum began in the late 1960s,” he said. “The most given reason is urban decay, but there’s multiple reasons. The others are that the industry left and technology took its place.”

But Foster explained that Philadelphia had one of the most diverse work forces; not just one big industry like steel in Bethlehem, Pa.

“What happened was the political system,” Foster said. “They decided that they would make the Philadelphia economy hard to do business with and chased the businesses out.”

It wasn’t just the white-collar jobs that went out of the window. It was everyone. The city had taxed everyone to the point where they just couldn’t make a business work in Philadelphia, let alone Germantown.

“Next thing it took were the subsidiary companies, which were the companies doing work for others,” Foster explained.

Foster said that a rate of 100,000 people per year disappeared from Germantown. The end result was too many houses with not enough people.

Foster argued that the neighborhood’s crime rate has risen since the hiring of Police Commissioner Charles Ramsey in 2008. But Foster offered a solution as to how to return Germantown back to its self-supporting economy of the 1960s.

Aggressive tactics and foot patrol by the cops of the 14th Police District, he explained, are necessary so that those committing these crimes get the message that “You’re not going to get away!”

Foster said that he believes a change in how Germantown is identified by the city government is in order. He said that in recent memory, the city has been blasting Germantown as a haven for criminals and has consequently discouraged potential patrons from exploring its historical past.

“Focus on it as a tourist destination!” said Foster.

The house where Foster works is just an example of what he has in mind.

“This building was occupied by Thomas Jefferson when the government moved to Philadelphia. It had been the home of the mayor, a summer house. But he gave it to Jefferson when he came here,” Foster explained.

History seems to haunt you no matter where you go in Germantown. Just next door to The Germantown Chronicle is Grumblethorpe, a house built for John Wister back in 1744. Two blocks down, you’re in the middle of a renovated historic square and the location of the Germantown Historical Society. As you venture down further on Germantown Avenue, you’ll find at least four historically significant landmarks within a three block radius. But there’s no way that you would know all of that unless you meticulously investigated what Germantown has to offer, which is unlikely for tourists to do. Commercials in the region seem to suggest that Independence Hall is the only place that has historical significance to Philadelphia.

For now, Foster realizes that he’ll just have to settle for Germantown only being a historical destination for a limited audience.

This article was written and reported by Anna Berezowska and Genevieve LeMay for Philadelphia Neighborhoods, a publication of Temple University's Multimedia Urban Reporting Lab, and originally published on March 3, 2011.