Historic RittenhouseTown: Papermaking at the Birthplace of American Paper 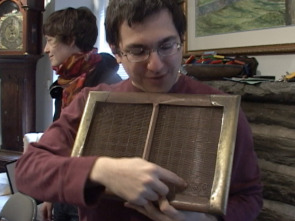 Philadelphia is home to a lot of firsts, including the first known American flag in 1777 and the first meeting of the U. S. Congress in 1789.

Nearly a century earlier there was another important, albeit lesser known, first in Philadelphia: the construction of the first paper mill in British North America located at what is now Historic RittenhouseTown on the northern bank of the Monoshone Creek.

Built by William Rittenhouse and his son, Nicholas, in 1690, the mill supplied paper to both the Philadelphia and New York areas.

William Rittenhouse was born in Germany in 1644. After working at a mill in Mülheim, he moved to the Netherlands and learned the Dutch technique of paper-making. He immigrated to the newly founded colony of Pennsylvania in 1688 and established his paper mill just two years later.

The paper mill was placed on a creek that Steven Greenstein explained “was the source of power and water for the paper-making process that the Rittenhouses used.” Greenstein is a weekend your guide and program assistant at Historic RittenhouseTown. “There are several fast moving streams in this area so [others] also had several other mills around.”

Over the years, the RittenhouseTown site has gone through some extensive archaeological excavation. During the summers of 2008 and 2009, work was done at the site of the original paper mill and three of four corners of the original building were dug up.

“We thought we were only going to find the basement floor and we actually found that there is so much rubble on the site that we have probably a ruin which is maybe just the entire first floor, walls and everything,” said Chris Owens, Historic RittenhouseTown’s executive director.

However, work on that project is currently at a standstill. It is a very expensive undertaking, Owens said. “We covered up what we had until such time that we have the money” to complete the necessary work.

The original mill site sits just south of the Abraham Rittenhouse Home, which now acts as the Visitor Center. Although its origins are unknown, Historic RittenhouseTown believes that the Abraham Home was built by one of Nicholas Rittenhouse's sons in the 1720s.

The site expanded over time. The Rittenhouses were the sole residents through the mid-19th century. “They had to start hiring people as the operations got bigger,” Greenstein said.

In its heyday, “there was up to 40 buildings in this area, including a school and firehouse,” he added.

Although many other historic sites in Germantown and Philadelphia alike have changed a bit over time, this site “looks pretty much as it did when it was built,” Owens said. “I like to say to the kids when they come that if Mr. and Mrs. Rittenhouse came by today, they would recognize their house.”

It is also special because of its historical significance, Owens added. “There is only one that can be the first of anything,” and the RittenhouseTown mill was the first of its kind in America.

In 1984, Hugh Hanson founded the Friends of Historic RittenhouseTown, the organization responsible for preserving the site.

Hanson, like his father, was in the paper business for a large portion of his life. “His dad, when they were little, would put the kids in the car on Sunday and after church they would ride through town to see where papermaking had first began,” Owens said.

After retiring, he founded the organization and took it on as a retirement project. In the early 1980s, RittenhouseTown “was pretty much falling down around itself,” Owens said, and Hanson wanted to stop the buildings from either being torn down by the city or falling down on their own.

After nearly two centuries of operation, technological advances ended the need for milling at RittenhouseTown. Beginning in 1890, pieces of the land were slowly sold, first to the city of Philadelphia and then to the Fairmount Park Commission. The remaining land was sold to the city in 1917.

The original paper mill was demolished by the commission in the latter portion of the 19th century, soon after it acquired the land the mill stood on.

“They didn’t have the same sort of historical preservation emphasis that we have today,” Greenstein said, referring to the 19th century. “Industrial uses didn’t mix well with park line.”

There is also a bit of more current history tied into RittenhouseTown. In 1938, as part of President Franklin Roosevelt’s "New Deal," the Works Progress Administration built a barn “on or near the site” of the original barn, Owens said.

The WPA was a pubic works project agency that put millions of people to work during the Depression. The Fairmount Park area benefited from various projects during that time.

There is still a special feel to the site. “It’s still a little village,” Owens said, “if you can block out the noise from Lincoln Drive.”

This article was written and reported by James Riggio and Max Webber for Philadelphia Neighborhoods, a publication of Temple University's Multimedia Urban Reporting Lab, and originally published on February 18, 2011.