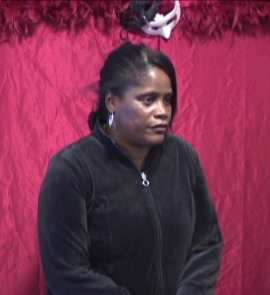 “We celebrate Valentine’s Day by acknowledging and thanking our Veterans, whether they’re here or not,” said Dr. Althea Hankins while scouring the crowd for a Tuskegee airmen who happened to be missing in action. Staring back at Hankins, a medical doctor by day and curator on the weekends, was a small crowd of 15 people.

They were gathered there for the ACES Museum’s Black History Month Celebration and Valentine’s Day Love Festival. Quite the tongue twister for a two-part event that was made up of a puppet show and musical performance upstairs and a quick tour of the slave exhibition downstairs.

The building that houses the ACES Museum, located at 5801 Germantown Ave., is part medical clinic and part history museum. Hankins just happens to run both under the same roof.

Despite “being too tired to be able to breathe,” Hankins made it abundantly clear why she was pushing herself to work overtime at the museum.

“First off, our presence has stopped drug dealing on Price and Germantown. Second, we have an indefinite tribute to the veterans. Period. To the veterans of Germantown. Third, we are a little Disney World. People don’t associate Germantown with fun,” she said with a smile.

Walking around in a claustrophobic basement where the ceiling hung at around a little over six feet from the floor, Hankins voiced her frustration about the inhumane treatment of slaves.

“They would never see the sun, can you imagine that?” asked Hankins. “They were just hidden away from sight here in this basement.”

“But y’know it was the effort of not just white people. But it was free blacks as well. They made up along with others a whole middle class. They were educated and helped educate others,” Hankins said.

“These are the original bricks and this is the original ground,” Hankins said, patting the brick wall next to her. The basement was split into two main rooms that house the “Makin’ Da Nade” Exhibition.

“What did slaves do? They were always getting lemons, so you gotta make lemonade,” said Hankins.

The exhibition is a mixed bag of tricks. The front wall when you enter below holds original paintings depicting various scenes of Africans. One exception shows the Buffalo Soldiers, a black cavalry regiment.

“It’s not very well known but these black soldiers actually prevented the slaughtering of Indians.” She described the actions of four infantry and cavalry regiments that took part in the Indian wars in the late 1860s.

The crowd followed Hankins as she moved in closer to a poster sized printed copy of marriage certificates that belonged to slaves from the early 1800s.

“Marriage was forbidden for slaves,” she said. She explained that marriage could not have been allowed back then because it would have placed slaves on the same level as their masters.

“Any slave caught jumping the broom would have been killed or mutilated,” she explained to the crowd. Jumping the broom is exactly what it sounds like, but it stands as a metaphor that came from an African tradition. The new groom and bride would stand side by side and jump over a broom at the same time.

“It’s a jump from the old family to the new. A transition,” Hankins added.

The crowd is guided into the room next door. Justin Ragsdale, the curator of the Lest We Forget Museum of Slavery, gave the opening speech of the exhibit. He began by explaining Philadelphia’s ties to slavery.

“Ships pulled up to Market Street. The captured Africans walked and were sold on the corner of Dock Street,” he said. “Those who weren’t were walked to Fourth Street to where the Maritime Museum is now located and later sold on Congo Square.”

Mickel Collins followed Ragsdale and began reading a poem written by Paul Laurence Dunbar titled, “A Marriage Proposal.” After Collins finished with the poem, Hankins asked for a couple to volunteer for the jumping the broom part of the tour. Melissa Underdue, who played a Billie Holliday puppet upstairs, went up along with Solomon Williams, who does PR work for the museum.

A fast percussion beat picked up in the background, while Hankins began a chant about impending doom.

She continued to hasten her chant, “Count this old life to new life together.”

Then in midst of cheering from the crowd and the percussion deafening their ears, the couple jumped over the broom. Applause erupted from the audience.

But all of these reenactments and tours tied back to the community.

Ragsdale discussed the importance that all of this history holds for today’s youth.  He explained that no one could be described by any of the slurs that he had mentioned. Rather, he described everyone in the room as “the strongest people around.”

During this discussion Hankins recalled an incident a few days ago when some young teens began fighting outside of the clinic. She was left without any choice and intervened.

Hankins and Ragsdale both explained that the violence and lack of education have made programs and museums like ACES an essential learning experience for the community.

“This place here should be enshrined,” said Ragsdale.

This article was written and reported by Anna Berezowska and Genevieve LeMay for Philadelphia Neighborhoods, a publication of Temple University's Multimedia Urban Reporting Lab, and originally published on February 17, 2011.