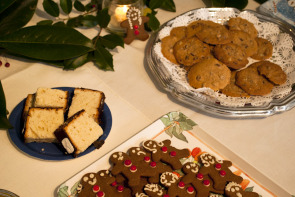 After James Logan’s death in 1751, his 500-acre estate was repeatedly cut up and sold off up until the mid-1900s. The farms and fields that stretched through North Philadelphia were eventually reduced to three acres. Although restoring his original property is out of the question, The National Society of Colonial Dames of America has been working to rebuild his legacy.

The Dames took over the site in 1899. “We’ve been taking care of it for a long time now,” says Dame DeDe Hayward. “We make sure it’s in good condition to have tours and events.” In recent years the Dames have focused on public outreach. One way that they do this is with an annual Christmas tea party. Cookies and sandwiches are laid out for visitors and craft making and tours are available, free of charge. Hayward is a part of the committee that helps to plan events to raise awareness of the site.

The NSCDA was founded in 1891. The organization works to promote national heritage through education and historic preservation. The Dames oversee more than 50 sites throughout the country. Lisa Street, the chairperson of Stenton, has been a dame for three years. “I’ve always loved archeology and the preservation of old houses,” she says. After studying her own family’s lineage, Street found that her roots went back to the American Revolution. Street applied to be a part of the NSCDA after a friend told her about it. The requirements are tough to meet. “An ancestor must have provided a service in the colonies prior to July 4, 1776,” explains Street.

The Dames’ work at Stenton is evident. The tea party attracted a lot of new faces. “It’s a really nice turnout,” says Street. “We’re really pleased.” The Stenton staff is always looking for new ways to draw interest to the 300-year-old building. They put ads in papers, hang signs outside, and update their website regularly. Street credits much of the increased interest to the History Hunters—a program that lets underprivileged children visit the house and other Germantown sites for free. “The kids get interested and want to bring parents,” says Street.

Despite the rise in visitors, many local residents are not aware of Stenton. The building has an obscure location and is guarded by trees and a tall fence. The neighborhood itself is a turn-off to potential guests; it’s perceived as dangerous. Also, Stenton stands apart from the many attractions in nearby Germantown.

Stenton can’t be moved from its neighborhood, so the staff is trying to rehabilitate it. A major concern is an adjacent derelict factory. It has loomed over Stenton for decades. Dennis Pickeral, the director of Stenton, says that the staff has suggested setting up community gardens in the space. “We’re also an active voice in the rehabilitation of the Wayne Junction Train Station,” says Pickeral. The station, just a few blocks away, is a stop for six regional rail lines.

Meanwhile, the Dames are doing all they can within the gates of Stenton to make an impact. They have effectively brought the centuries-old home to life. Although Stenton has become more than just a tour of James Logan’s home, the Dames assure that history is its most important contribution to the city. “It’s important for the future to know about your past, to understand history and have an appreciation of our country,” says Street.

This article was written and reported by Alex Onkow and Stacey Naughton for Philadelphia Neighborhoods, a publication of Temple University's Multimedia Urban Reporting Lab, and originally published on Dec. 8, 2010.