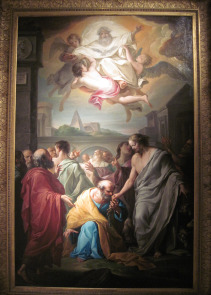 Nestled in the basement of Olney Hall at La Salle University is a small art museum that contains pieces from all over the world dating back to as early as Ancient Greece.

The La Salle Art Museum holds special exhibitions for three-month periods. The display for the winter of 2011 showcases the work of prominent Germantown artist Benton Spruance, a 20th century lithographer and printmaker.

Spruance, born in 1904, was raised in Philadelphia and the surrounding counties. He moved to Germantown with his wife in 1929 and moved around the neighborhood until his death in 1967.

Putting together the “City Views” exhibition was no easy feat. “There were a number of works that specifically looked at Germantown and Philadelphia from the 1930s,” Carmen Vendelin, the museum’s interim director and assistant curator of art, said. After much consideration, the exhibition was eventually cut to the 23 lithographs currently on display from the larger collection of prints available.

Most of the exhibition contains black-and-white lithographs from the 1930s, although some of his older, colored works are also on display. The museum also has an older Spruance piece on permanent display.

Many of the buildings depicted in the lithographs are from the areas surrounding one of the many homes he lived in while in the neighborhood. Most of the buildings are still standing and can easily be recognized. “I thought that would be an exhibition that would be of great interest to people locally because they would see locations that they recognize,” Vendelin said. “It’s also some of his lesser known work from earlier on in his career."

His career first began in 1928, a few years after an inspiring visit to The Metropolitan Museum of Art. Spruance had his first solo exhibition in New York City five years later, his first time in the national spotlight. His career continued until his early death just before he turned 40.

After his death, Spruance’s close friend, Emerson Greenway, the library director of the city, donated some of his work to the city’s library. “Many of the pieces are on loan to us from the Print and Picture Collection at the Free Library of Philadelphia,” said Clark-Binder. The other pieces came from a loan from the Dolan/Maxwell Gallery and “from a very generous local couple.”

Today, works of the late Spruance appear in museums nationwide, from the Library of Congress in Washington, D.C., to the Museum of Modern Art in New York City.

The museum is free to the public.

This article was written and reported by James Riggio and Max Webber for Philadelphia Neighborhoods, a publication of Temple University's Multimedia Urban Reporting Lab, and originally published on February 4, 2011.