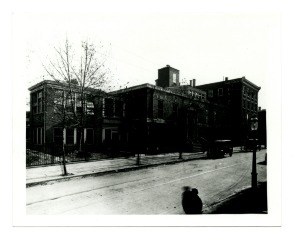 In 1824, when William McMullen, the infamous boss of South Philadelphia politics in the mid-19th century was born on 7th Street between Fitzwater and Bainbridge, “the land west of Seventh was woods and ponds and grazing cattle” according to historian Murray Dubin. At the frontier of urban development, Irish and African American communities chafed against each other. The first African Presbyterian Church was built on Seventh Street below Shippen Street (Bainbridge) in 1811 and represented the first African American Presbyterian congregation in the United States. The Irish moved into the neighborhood in droves by the 1830s, and when riots broke out between the two groups on 7th Street in 1834, Stephen James, an African American man was killed. Even as late as 1860, “the police station at the southwest corner of 8th and South was known as the Farm because of the open fields nearby.” Christian Street represented the end of heavy residential and commercial development to the south.

This would change as eastern and southern European immigrants poured into Southwark in the late 19th century. Italian, Lithuanian, Ukrainian, Polish, Hungarian, Romanian, Austrian, and Russian immigrants entered at the docks of South Philadelphia. Russian Jews fleeing the aftermath of the assassination of the Russian tsar in 1881 comprised the largest proportion of the new immigrants. By 1910, Russian Jews were the largest immigrant population in South Philadelphia. Nearly half of the new eastern European immigrants found jobs in the garment industry; the others peddled or sold goods in “the community around South and Bainbridge Streets, Fourth to Sixth Street,” which “became a transplanted shtetl, a compound of pickle barrels and pushcarts and the sounds of Yiddish,” according to Dubin.

Between 1870 and 1910 the population of South Philadelphia doubled to 336,000, exacerbating problems with sanitation and housing in the overcrowded slums of Southwark. But the Jewish population did not stay in one place long. Many of the Jews who had arrived in the 1880s had already moved to the suburbs by 1900, or to the houses Spruce and Pine Streets whose former residents had left for the Main Line and Chestnut Hill when the Pennsylvania Railroad established lines to those areas. Newcomers in the early 20th century continued to move farther south. This is evidenced by the building of Mt. Sinai Hospital (recently converted into an apartment complex) in 1921 by Russian Jews between 4th and 5th streets along Reed street, between the community’s initial center at 5th and Bainbridge streets and the area south of Snyder where it would relocate.

By World War I, 7th Street, mostly south of Tasker Street, had become “a shopping mecca,” where Jewish merchants sold anything that could be bought. It would become the major artery of the Jewish neighborhood in South Philadelphia, surrounded by important community centers like the Workmen’s Circle on 6th Street and Tasker Street, which worked to preserve and promote Yiddish culture in the United States, and whose members were deeply involved in the labor movement. Allen Meyers described 7th Street (the zibete) as a kind of shopping mall/bazaar—that it had “food stores, fish stores, clothing stores, anything you wanted.” Historian Rakhmiel Peltz, in an ethnographic study of the area in the 1980s, stated:

My acquaintances there remembered that in the 1940’s there were four kosher butchers on a single block of the zibete. The residents recalled with nostalgia the stores that stayed open past midnight—the kvas (cider) stand and the peanut store with the piball machines—as well as the Saturday promenades where they socialized and showed off their best. And they remembered the flowing Yiddish speech, the language of commerce on the zibete.

Moreover, like Passyunk Avenue, 7th Street became a thoroughfare on which Neckers (those Philadelphians who lived in the somewhat isolated rural region where the sports complex sits today) brought produce up on Saturdays. According to an interview in Dubin’s book with Catherine Williams, an African American woman who had spent much of her childhood shopping on Seventh Street: “They would come up Seventh Street with pigs and chickens in their wagons.”

Meyers describes the importance of Jewish women on 7th Street. “Women ran the day-to-day operations while their spouses traveled as far as New York City for merchandise.” They would sell their wares from pushcarts, which “looked like miniature American-western Conestoga Wagons,” and take them home every night. The famous open-air market was the place to go in the neighborhood for anything from hot dogs and ice cream to groceries, to letters for the local basketball team’s jerseys. “The stores sold furniture, children’s clothing and toys, dresses, linens, delicatessen, lumber, and almost everything else.”

Seventh Street was a booming commercial corridor for decades, but by the middle of the 20th century the Jewish population in South Philly had declined dramatically: from 50,000 Jews in 1930, to 35,000 in 1942, and only 15,000 by 1958. Peltz found that by the 1980s the zibete was “the most obvious locus of change in the neighborhood,” with numerous vacant buildings intermingled with the remaining stores. “The last blow to the vitality of this shopping street came in the late 1970’s with the construction of one of Philadelphia’s largest shopping centers just a few blocks away on Oregon Avenue, between 3rd and 5th Streets.”

Peltz claims the zibete had become the center of the neighborhood by the 1940s, and continued to be so even as late as the 1980s when the Jewish population only comprised three or four thousand, a dispersed minority. The Young Women’s Union, a settlement house started in 1885 at 5th and Bainbridge streets that was reincorporated the Neighborhood Center by 1918 had considered a move south as early as 1923. In 1948 it finally followed the Jewish population to Marshall and Porter streets. By the 1980s, it was known as Stiffel Senior Center and remains open today, serving the neighborhoods current and former Jewish residents as well as other local seniors. Many of the remaining Jews in the neighborhood of the 1980s spent time at places on 7th Street like Izzy’s luncheonette. Izzy, who also ran the Young People’s Congregation just off 7th Street on Moyamensing Avenue, had been around for a half century, a member of one of many families that put up storefronts in front of their houses on 7th Street in the 1920s. Those Jews who remain represent continuity in the neighborhood, since the overwhelming majority of residents are from families who have lived there since the turn of the 20th century.