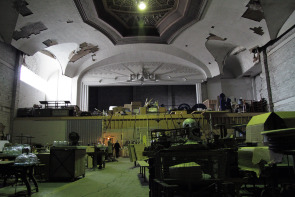 Serving the community as a movie palace in the neighborhood known today as Mount Airy, the Sedgwick Theater has become a local historic site.

Since its opening in 1928, this theater has been one of the last existing original movie palaces in the Philadelphia area. After being closed for several years, the theater was bought by Mount Airy residents Betty Ann and David Fellner in 1994.

At the time when Mrs. Fellner became interested in Sedgwick, she had finished her career as a teacher and had become active in community organizations. One organization that she favored highly was an organization that worked to create arts in various communities within the city. One day while walking along Germantown Avenue, Mrs. Fellner was beaming about her experience in the organization to a friend who enlightened Mrs. Fellner about the art that existed in their own neighborhood, the Sedgwick Theater.

“I had never noticed it,” said Mrs. Fellner. “When I went home I said to David, ‘there’s a theater for sale.’”

Her husband, David, who has a background in urban economics, proposed the idea of moving his car business into the back of the building and allowing her to have the cultural center in the front. However, buying the theater was not so easy. There were many people that thought the block where the theater is located was a lost cause. Mrs. Fellner explained that the banks would not lend to them because they also did not see the value in the theater. Therefore, to finance their ambitions they sold their home and moved into an apartment above the stores.

To see how people in the neighborhood would respond to Sedgwick, Mrs. Fellner and some community members held a fair for artists and residents to find out what they wanted to see in Sedgwick. Friends and volunteers gave concerts and displayed their art in the building. The response by large from the locals was that they wanted the Sedgwick Theater to be restored back to its original purpose as a movie palace. However, Betty Ann decided to take it slow and continue to have events in the theater to attract people, knowing the task of recreating the movie palace would not be financially feasible in the near future.

“That is millions of dollars of work,” Mrs. Fellner explained. “It’s an enormous job to get that kind of campaign going.”

Instead, the theater became the Sedgwick Cultural Center for 10 years and provided the community with music shows, art galleries and the like. The center held a Sunday afternoon jazz program for children and families, which continued for years. In addition, they had a teen jazz workshop and a Wednesday Wow weekly event for children as well.

“We realized that we were building community through the arts,” Mrs. Fellner said, “and that became our official tagline.”

One signature event hosted by the Sedgwick Cultural Center was Art Jam, an annual arts and culture festival. From Poetry readings in the library to art displays on the sidewalk, this block-party along Germantown Avenue became an annual occurrence in the Germantown/Mt. Airy area. Although, the Art Jam event became dormant for a few years, it has begun to make a comeback. This past June the Mt. Airy Business Association hosted the Art Jam and kept the tradition of infiltrating the whole block with music and art.

After Mrs. Fellner retired, the Sedgwick Cultural Center was not able to find the financial power to continue to thrive. A few years after her retirement the center was shut down. The Fellners still rented the place out for special events, and recently a more permanent group has come into the space. The Quintessence Theatre Group has brought theater back into the building, performing plays such as Shakespeare’s Henry V and the current production of Plato’s Apology.

“People who have never been here before are sort of blown away by the space because you don’t really get this kind of architecture anymore. The fact that it is still here and still exists has definitely made people understand the need to preserve it and to keep using it,” said Pamela Reichen, the assistant artistic director of the Quintessence Theatre group.

On a block that people had once believed would not become a prominent spot in the community when the theater was purchased by the Fellners, now the block is populated with people stopping into restaurants and local businesses. Mrs. Fellner explained how years ago the theater had attracted more people to visit the local eatery and the local florist, thus boosting their businesses. Now that the Quintessence Theatre group is hosting a full season of performances, Sedgwick is again having a positive influence on the neighborhood.

“Restaurants are picking up again after and before the shows, no question,” said Mrs. Fellner.

The Quintessence Theatre group uses Sedgwick from August to mid-December. From mid-December to mid-January the Fellners rent the space for parties and other events. There are two weddings scheduled to take place at Sedgwick in June.

Mrs. Fellner is content with sharing the space, but at the end of the day, “people still want a movie theater,” she said.

This article was written and reported by Keisha Frazier for Philadelphia Neighborhoods, a publication of Temple University's Multimedia Urban Reporting Lab, and originally published on December 9, 2010.