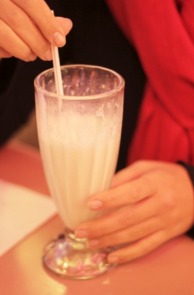 The Trolley Car Diner was transported by truck 10 years ago from Wilkes Barre, Pa., to its current site in Mount Airy. Owner Ken Weinstein was able to find a vacant Roy Rogers site along Germantown Avenue for the diner’s newest location.

“There used to be five original diners in Wilkes Barre and we took out the last one,” said Weinstein.

On Aug. 8, 2000, the Trolley Car Diner opened for business with its 1952 model attached to the former fast food establishment’s building structure. Weinstein and his former business partners, Bob and Nancy Elfant, renovated the old diner to resemble its original glory days, but with added seating, a larger kitchen and a take-out deli counter.

The diner was nameless for about two months before its current name was found as the result of a contest. The “Name the Diner” competition had over 1,000 submissions, but one name stuck out from the rest: the Trolley Car Diner. The name was derived from the Route 23 trolley car, which ran along Germantown Avenue where the diner is now located. A neon sign with the diner’s new name and a picture of a trolley car was installed onto the original structure’s roof, making it the largest in the Philadelphia area.

In July 2003 Weinstein purchased a 1948 trolley car from SEPTA to go with the diner’s trolley car theme. It is an original PCC trolley car, but inside you will no longer find seats; instead the car has been transformed into a fully functioning ice cream stand. The Ice Cream Shoppe has become a popular attraction with not only the Mount Airy community, but with visitors from other sections of Philadelphia and even non-Philadelphia residents.

Gena Lopata, a resident of Mount Airy, has been coming to the Trolley Car Diner for the past few years. Lopata and her family enjoy coming to the diner for their all day breakfast menu, but have recently found a new love for the Ice Cream Shoppe’s frozen treats.

“We were coming here every Saturday after soccer. We definitely love the water ice and the ice cream. It’s good stuff,” said Lopata.

Lopata and her children have participated in the diner’s Helping Hands’ Week, which is designed as a fundraising opportunity for local non-profit organizations. Every week the diner has two non-profits that host the fundraiser and are given 15 percent back for each customer they bring in that day. In the past eight years the diner has helped raise over $100,000 for neighborhood organizations. Lopata believes that the diner’s fundraising opportunities has allowed it to become closer to the local community.

“The Weinsteins live on our street, so I think its a really nice thing they offer up,” said Lopata. “It [really makes it] a part of the community, which is cool.”

This year has been a very active one for the diner due to its 10-year anniversary, but not all of the events are new for 2010. Weinstein has been organizing community events at the diner for the past 10 years and this year was not extremely different from the previous years. For him, these events are one way to give back to the community that has given him such great support for the last 10 years.

“I do it for the community,” said Weinstein. “And our customers appreciate it.”

Not only did Weinstein and his former partners bring a family-friendly and community oriented diner into the local community, but they helped preserve a piece of Pennsylvania history.

“Unfortunately, diners have been in decline over the years and many have been bulldozed,” said Weinstein. “So we were very happy to save this one.”

If you have questions about the Trolley Car Diner or any upcoming events, please visit the website at www.trolleycardiner.com or call 215-753-1500.

This article was written and reported by Lisa Wilk for Philadelphia Neighborhoods , a publication of Temple University's Multimedia Urban Reporting Lab, and originally published on November 12, 2010.