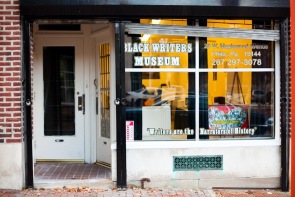 While various cultural institutions that focus on black culture exist already, this museum specifically showcases the impact that black literature has had on society. Currently, the museum has one exhibit open that displays photographs, works and other relics from the Harlem Renaissance.

Supreme Dow, the founder and executive director of the museum, has funded the non-profit organization out of his own pocket and from the donations of others. Although it currently requires sacrifice, it is one Dow is willing to make in order to provide a cultural venue that encourages academic enrichment and increases historical pride.

“I think that literature is the most powerful artistic venue for anyone because it can change and transform someone’s life,” Dow said. “The power of the word is outstanding.”

His goal, Dow said, is to raise a generation of youth that write well, speak well, and have strong academic abilities. In his efforts to have a positive impact on urban education Dow has been partnering with the local schools and youth groups to strengthen interest in black literature and culture.

“If we continue to teach about what has come before us it will inspire other writers to come about,” Dow said. “We want to be a hub for literary conversation so the next Zora Neale Hurston will walk through these doors.”

Victoria Bennett, board chair of the Black Writers Museum, echoed Dow’s understanding of the importance of revitalizing youth and families through literature. “People need to know they have a linkage to greatness,” she said.

While the museum offers programs geared toward children and young adults, including book clubs for teen boys and girls, creative writing workshops, literature readings for children, and a summer camp, it is also working toward becoming a library and resource center for adults interested in the field.

Dow has collected over 1,000 novels so far and hopes to open the library when he has between 2,000 and 3,000 books. He has already received four donated computers for the resource center. Dow, an author himself, also provides technical assistance to people who are interested in writing books.

The museum is frequented by a significant number of people walking by. Larry Smallwood Jr., a native Philadelphian and anthropologist, walked past the museum and was pleasantly surprised. Smallwood is a tutor at the T. M. Pierce Elementary School in North Philadelphia and plans to bring his students to the organization.

“I think that there are some things that we can join the museum on programmatically,” Smallwood said.

The Black Writers Museum will continue to be integrated within the community of Germantown and Philadelphia at large. It is working toward publishing a magazine that will be released during the next Black History Month in February and continuing programs that are influential to the development of the youth in the area.

For more information about black writers of the Harlem Renaissance, visit the interactive map of their birthplaces.

This article was written and reported by Sarah Fry for Philadelphia Neighborhoods, a publication of Temple University's Multimedia Urban Reporting Lab, and originally published on November 11, 2010.