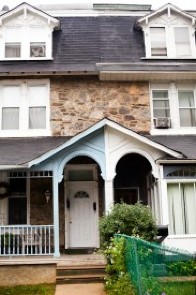 In Philadelphia a neighborhood is frequently seen as a part of the city that is connected by location only. Sometimes people or organizations come together and try to unite the people who live and work in the neighborhood, but more often than not the response is fleeting at best. This, combined with a population that can best be described as transient, can make what could be a neighborhood nothing more than a part of the city with a fancy title.

“We make sure that our residents are safe, that they’re happy, that it’s an interesting place to live. We look to keep the neighborhood diverse, safe and the type of neighborhood that people are interested in living in. That could mean anything from clean streets, to great schools, to affordable housing, to freedom from anything from physical crime to graffiti. We help people with all of those issues. We also [distribute] both electronic and paper newsletters to all of our members.”

Some of the other initiatives include a group that seeks to visually improve the area. This can include planting new trees along their thoroughfares, so in the future the streets will continue to look as green as they do now. The group also organizes cleanup days, which beautify some older buildings.

The association and the neighborhood also participates in Mayor Nutter’s Philly Spring Cleanup Program. Every year the city provides equipment to the neighborhood to beautify its environment, with the added bonus that the neighborhood gets to keep the equipment so that it can continue to organize smaller cleanup days throughout the year.

West Mt. Airy Neighbors recently celebrated its 50th anniversary. It was founded in 1959 by George Schermer, who, according to the group’s website, was Philadelphia’s first director of the Human Relations Commission. Since its inception the group has been focused on maintaining an ethnically and socially diverse neighborhood.

“We just celebrated 50 years of intentional desegregation--the red lining that was going on in the 1950s and 1960s, along with the white flight with realtors. A black family would move into the neighborhood and they would start flipping the houses, they would go to the white home owners and say ‘this is what’s happening and you need to get out now’ and flip the houses. West Mt. Airy Neighbors, along with a lot of the religious institutions in the neighborhood, came together and said ‘we are not going to allow this.’ People intentionally stayed in the face of the white flight, and it worked. We still to this day have a truly integrated neighborhood,” said Macoretta.

One of the association's current issues is the school system in the area. “We have public schools, private schools and parochial schools in this neighborhood. What we try to do is disperse the information to our residents about the types of schools that are available for their family. We are moving forward in reinvigorating our schools committee and focusing on our public schools. Private schools are extremely expensive and outside the reach of so many of our residents, so our schools committee is focusing on our wonderful public schools and enriching the daily programs available for the students. We ask ‘what can we help to do?’ ‘Can we do a partnership with the public library, can we do a partnership with the Weaver’s Way Co-op, they’re doing wonderful things with the public schools right now.”

The actual celebration of the 50th anniversary was atypical of normal landmark years for like minded groups. Macoretta says that, while many other groups simply will have a ceremony or a dinner that’s a “self congratulatory pat on the back,” West Mt Airy Neighbors decided to print a booklet that celebrated the community. Held within are a number of the best neighbors in the community, with stories and pictures of all of them.

The future for West Mt Airy looks bright with this group. Macoretta said that she hopes to maintain diversity within the neighborhood, that the prices of real estate don’t climb so high, that the family with an average income can still come into the community, and that the homes themselves can be maintained as they age. Much of the architecture is from the beginning of the 1900s or the end of the 1800s and needs repair.

But most of all, Macoretta hopes that in another 50 years West Mt. Airy Neighbors will still be able to continue to help serve the community of Mt. Airy.

This article was written and reported by Chris Banks and Sarah Fry for Philadelphia Neighborhoods, a publication of Temple University's Multimedia Urban Reporting Lab, and originally published on September 29, 2010.