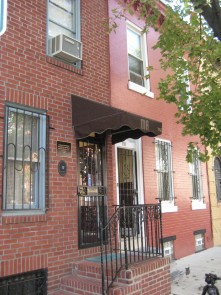 The Marian Anderson Historical Society is a group dedicated to promoting the late classical singer, who was considered one of the most important opera performers of the 20th century. The organization was founded by Blanche Burton-Lyles and has existed for the past 12 years.

Marian Anderson, a contralto who died in 1993 at the age of 96, played with the New York Philharmonic in 1925, and in 1928 performed at Carnegie Hall. She went on to perform into the 1960s when she officially retired from singing.

She was the first African American woman to perform with the New York Metropolitan Opera and was awarded the U.N. Peace Prize in 1972. Anderson, whose father unloaded trucks at the Reading Terminal, was a native of Philadelphia, making this house an extremely important part of Philadelphian musical history.

Blanche Burton-Lyles was a longtime protege of Anderson. She even says on the historical society’s website that “Miss Anderson took an interest in my talents at an early age and was always very encouraging.”

Aside from merely promoting Anderson through displaying imagery from her life, the society seeks to spread Anderson’s music throughout the world. The scholars' program frequently supports young classical and opera singers from around the world. These artists perform regularly at events that the society sponsors, and many have gone on to more prominent positions in places such as the Stattstheater in Stuttgart, Germany, and the Baltimore Symphony Orchestra.

On Feb. 27, the society will be presenting the Marian Anderson Scholar/Artists Concert, Dinner and Celebrity Ball at The Franklin Institute. According to the society’s website, the event itself will “raise financial resources to advance aspiring young opera and classical vocal artists of great promise.” This event is normally yearly, although last year the society was unable to hold the event.

This article was written and reported for Philadelphia Neighborhoods, a publication of Temple University's Multimedia Urban Reporting Lab, and originally published on September 19, 2010.