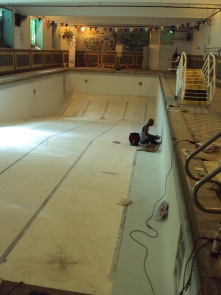 The Y, an institution that that evolved from an effort to encourage and support men in the mid-1800s into a community center in 1927, has reopened in Germantown after it closed in 2008.

The Germantown Y, located at 5722 Greene Street, had been closed due to flood damage since 2008. The complex had lost its charter with the YMCA and has since been renamed the Germantown Y. It reopened its doors to the community on September 11, 2010 with a huge celebration.

This past Saturday local citizens came out to see the recent improvements to the facility and to apply for membership. Residents like Mindy Flexer, who once included spending time at the Y in her daily routine, is glad to see the recent developments at the Y.

“I’m so thrilled that the Y is opening again. I used to swim here everyday on my way to school,” says the school teacher. “it was really a big loss when the Y closed.”

Constance Bille is currently a board member of the Germantown Y who worked on the recovery committee and whose children used to attend the Y. She believes that the spirit of the community, the people involved in the organization, and the help of divine intervention has resulted in the opening of the Y.

Senior Director Dennis Johnson plans to see to it that things do happen at the Y. As he spoke of the future, Johnson mentioned the desire to have programs geared toward toddlers, fitness classes for youth that will focus on issues of obesity, aquatic centers that can provide therapy for senior citizens, and resources for people with handicapped disabilities.

“The difference of this Y, Germantown Y, is that we are a community Y and people feel comfortable coming here,” he said. “We’re about family, we’re about structure.”

Within the structure of the Y, the organization offers affordable housing to low-income men in the community. Located in the back of the 400,000-square-foot building, this program remained unaffected by the flood and has been functional for the last few years. Historically, the residences were opened to serve migrant workers, but over time it became housing for low-income people and transitional housing for homeless men. Social services are also provided by the Y to aid people in these services. Bille views these residential services as a unique quality of the Germantown Y.

Bille noted that the Germantown Y has one of the last residential housing facilities of the sort in the Philadelphia area, and that there are not many of those facilities available in the country.

Better Turner, president of the GCC, describes the Germantown Y as an “anchor institution” whose “reopening has the ability to revive our community, and to let the community know that, yes we have had some challenging times over last few years,” she said, “but we are on our way back.”

This article was written and reported by Keisha Frazier for Philadelphia Neighborhoods, a publication of Temple University's Multimedia Urban Reporting Lab, and originally published on September 17, 2010.