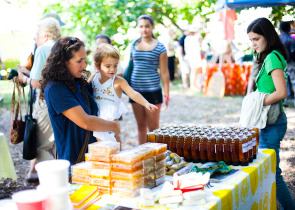 Philadelphia was buzzing last weekend as bee enthusiasts from across the country joined in the celebration of the 200th anniversary of Lorenzo L. Langstroth, the inventor of the modern beehive, in a three-day citywide event that was held September 10-12, 2010.

"Bees are struggling right now. There are a lot of environmental pressures on bees and there are diseases. It's getting harder and harder to keep bees," said Nicole Juday, horticulturist at the Wyck House.

The celebration of honeybees and Langstroth, “the father of bees,” comes at an important time as the honeybee population has been cut in half over the past 50 years. Bees are an important factor in food production because their practice of pollination aids in the growth of up to 30 percent of the food that U.S. consumers eat. Bees pollinate many crops including berries, cherries, melons, apples, avocados, squash, broccoli and carrots.

Instead of understanding bees as pests, these organizations strive to help others understand them as creatures that can be easily taken care of and enjoyed. Suzanne Matlock, coordinator of Honeyfest and member of the Beekeepers Guild of Philadelphia, said that she hoped to see families get used to honeybees, understand their importance and "not be afraid of them, not lump them in with wasps who sting you repeatedly."

At the festival vendors took orders for bee colonies and hives so that Philadelphians could start their own hives. Many people there already had hives in Philadelphia, including Matlock, who has eight hives in four locations, including at her home in Mt. Airy, Walter B. Saul High School of Agricultural Sciences, Arcadia University, and her parents' home in York County. She also mentioned that the benefits of keeping bees goes beyond free honey. The wax can be used to make an assortment of goods and propolis, collected from sap in leaf buds, can be used to clean wounds as it is anti-microbial and anti-fungal.

The Wyck House's premiere Honeyfest is one way the historic site is working toward a greater commitment to community involvement.

This article was written and reported by Sarah Fry for Philadelphia Neighborhoods, a publication of Temple University's Multimedia Urban Reporting Lab, and originally published on September 16, 2010.