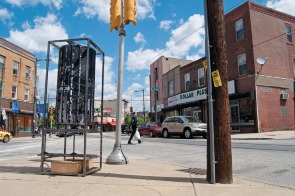 Away from the well-known business districts of the Ninth Street Market and East Passyunk Avenue is a business strip of a different sort. As was the case throughout many of Philadelphia's neighborhoods, the area anchored by the intersection of Seventh and Wolf Streets was once full of neighborhood stores. The shops here catered especially to South Philadelphia's Jewish community. Now, these businesses have long been closed, and the Jewish community dispersed throughout the city and suburbs. But echoes of the past remain in signs on shuttered shop fronts and in living memory within institutions such as the Stiffel Senior Center. But the neighborhood's future is also in evidence: the area is a growing center for Philly's Cambodian community. Seventh Street is now dotted with shops that sell vibrant traditional clothing, rent videos in Khmer and both a former church and a former synagogue have become part of a Buddhist temple complex.

Photographer RA Friedman used vintage photographic techniques and defunct processing techniques to give his work both an illusion of antiquity and a tactile connection to the past. With "7th Street Memory Box", Friedman took his work — usually seen in a gallery setting — and devised a method to display it in a public and interactive way that referenced the past by borrowing old technology.

The zoetrope is a machine that was invented in 1834. Used as an early animation device, it creates an illusion of motion through the rapid rotation of multiple images mounted inside a drum. A zoetrope can be almost as simple as a pinwheel — a ring made of paper and stuck on a stick— or as elaborate as the linear zoetropes that have been constructed inside subway tunnels in cities throughout the country. The structure of "7th Street Memory Box" was co-designed by Friedman with Jebney Lewis, who fabricated the steel frame and drum. Portraits of community elders, taken using a large-format vintage camera fitted with a Poloroid back, were then slotted in to the inside of the wheel to create the animation, while a street scene cloaked the outside of the drum.

During Journeys South, "7th Street Memory Box" visited the Stiffel Center and other locations in South Philadelphia and spent its Saturdays at Capitolo Playground, located at the "cheesesteak nexus" of Ninth Street and East Passyunk Avenue. Attracted by its unique appearance, passersby would pause for a moment in their daily business and experience the satisfaction of turning the crank and setting in motion portraits of Stiffel Center members. As the steel drum spun, the faces of these South Philadelphia elders moved and spiraled within a panorama of their changing neighborhood.

Follow this link to see the portraits and read the interviews!