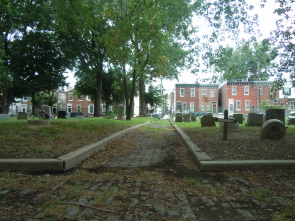 Fishtown residents have been laid to rest in Palmer Cemetery, or the Kensington Burial Ground, since before the American Revolution. This is because Anthony Palmer, a wealthy merchant, the president of Pennsylvania Provincial Council from 1747-1748, and the founder of Kensington, desired that his land “from the Delaware River on the south to Front Street in the north, and from Hanover Street (now Columbia Ave.) to York Street,” have a burial ground in which all neighborhood residents could obtain free plots. Today the cemetery is bounded by the intersections of Palmer and Belgrade streets to the south and Memphis Street and Montgomery Avenue to the north.

The Lenni Lenape tribe had inhabited the land, which they called “Kachamensi” (the European settlers changed this to Shackamaxon), until Swedish farmers bought it in the 17th century. Lasse Cock was the Swede who patented the Schackamaxon Tract in 1664, and in 1681, Thomas Fairman, William Penn’s deputy surveyor bought his property from the Swedish farmer. He built the Fairman Mansion near the historic Treaty Elm, on the space that would eventually become Penn Treaty Park. In 1729, Palmer purchased 191.5 acres from a descendent of Thomas Fairman. According to local historian Ken Milano, Palmer subdivided the 191.5 acres surrounding the mansion into lots “to develop his town of Kensington…and selling to shipbuilders, who were eager for waterfront property.” While the burial ground was originally set for Palmer’s family, by 1749 his daughter carried out his wish to have it made a public cemetery for all the residents of Kensington (Old or East Kensington was not yet referred to as Fishtown since Kensington’s westward expansion occurred mostly in the 19th century).

The different major ethnicities—English, German, Irish, and Polish—that resided in the neighborhood over the past 250 years are clustered into different sections of the grounds, as burial patterns at the cemetery have reflected the changing ethnic makeup of the neighborhood. From the beginning, Palmer desired a school to be built at the cemetery, where both German and English would be taught—evidence of the high numbers of German Palatines living in Kensington at the time. These German immigrants eventually commingled with the British fisherman also living in the neighborhood. More recently, though space is scarce (bodies must be cremated before being buried there and lots thought to be vacant have to be double-checked), neighborhood residents are still buried at Palmer cemetery. The one requirement is still that one must live or own property in the neighborhood to have a free plot. Famous Fishtowners like John Hewson, revolutionary war hero and the first calico printer in the colonies and Emmanuel Eyre, shipbuilder for the Continental Army, as well as soldiers of the past two and a half centuries of war, members of the famous Cramp family, and ordinary people who have resided in Fishtown over that time span are buried together at Palmer Cemetery.