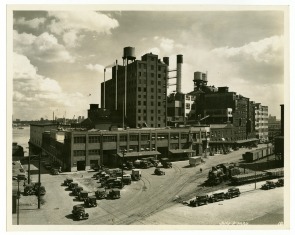 Known to many in the neighborhood as the Sugar House, this long-standing sugar refinery closed its doors in 1984. The Pennsylvania Sugar Refining Company was the last independent producer to fight the giant Sugar Trust early in the 20th century; it later became the Pennsylvania Division of the National Sugar Refining Company in 1942. Its story began with John Hilgert, a Bavarian immigrant, building a smear house at 5th and Girard in 1868 where molasses was refined. His son Charles moved the refinery to the foot of Shackamaxon Street in 1881, where, despite multiple owners, legal problems, and short periods of disuse, it remained for over a century until closing.

During the first half of the century, the Sugar House’s presence in the neighborhood and the city as a whole expanded—while it employed about 40 men throughout the 1880s, by the 1950s it employed over 1500 men and women. During World War II, it produced a whopping 408,000 tons of refined sugar. According to a former employee turned chronicler of the company named Dan Gutleben, it was the increasing demand for sugar by America’s allies during World War II that caused the plant, situated in a predominantly white neighborhood, to begin hiring African Americans. Nevertheless, this racial integration did not seem to last long, as Connie Galiczynski, who worked there in 1951, recalled that employees were all white by then.

At a time when many people stuck to their own ethnic parishes, she remembered the factory being the place where people of different cultural backgrounds and neighborhoods would interact. ‘If you wanted a fresh kielbasa, you could ask the lady from Port Richmond to bring one to work…Once I asked Mary from South Philly to pick me up a hot sausage,” she recalled, “I took it home and cooked it. I thought the smoke would come out of my husband’s ears.” She described the sexual division of labor at the plant: women worked at the conveyor belts performing functions like packaging while men worked as machinists. When the Sugar House closed in 1984, 600 men and women lost their jobs.

Today the Sugar House refinery is being remade into the Sugar House casino, which is slated for completion in the fall of 2010. It serves as another typical example of urban adaptive re-use: an industrial waterfront structure re-purposed for the entertainment/service driven economy. Whereas nearby Penn Treaty Park was partly industrial space appropriated by and for the community, local neighborhood activists like the Fishtown Civic Association and Casino-Free Philadelphia, who fear the deleterious effects of a casino in the neighborhood have opposed the building of the casino.

Yet the story of adaptive reuse extends much further back than the last few years. According to the Kensington History Project, the space “had a Spermaceti Whale Oil Works built atop an eighteenth-century shipyard, built atop a British Revolutionary War Fort, built atop Native Indian implements.” From 2008 to 2010, an archaeological dig as part of a federally mandated historical review of the site turned up hundreds of Native American artifacts – some from long before the area was occupied by the Lenni-Lenape Indians encountered by William Penn, such as an arrowhead from circa 1500 BCE. Though the digs did not verify the remains of sites like British Redoubt #1, a loyalist British fort during the Revolutionary War, and Bachelor’s Hall, an 18th century gentlemen’s club, a large amount of evidence points to their former existence on the 22-acre casino site. In fact, it may well have been the building of the sugar refining company on the site in 1881 and its later expansions that destroyed potential artifacts.