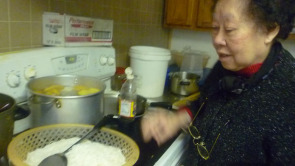 Sunday service at the Bo De Temple on 13th and Washington streets rung with the deep sounds of gongs and melodic chanting coming from the cross-legged congregation that sat scattered on the large room’s floor. Incense clouded the room with scent and smoke while offerings of small bowls of rice and slices of watermelon were placed on the altar.

The tranquility of the upstairs proceedings are profoundly contrasted by the bustling ground floor where children play tag, chatter flows out of the kitchen where the day’s vegetarian lunch is being prepared and the men sit close in conversation with hands clasped on each other's back.

Outside, the Temple’s columns are painted gold on which countless flags wave proudly. Pride is the way of South Philadelphia’s Vietnamese community, as evident from the bright and colorful stretches of shopping centers along Washington Avenue owned mostly by the area’s Vietnamese population.

According to 2000 U.S Census data, there are 6,000 Vietnamese immigrants living in Philadelphia -- resulting in the third-largest Vietnamese population on the East Coast. It appears to be a community that’s thriving, having made leaps in progress since the 1970s and early 1980s when a majority of Vietnamese immigrants were arriving as refugees of the Vietnam War. However far they have come, lingering issues of poverty still grip this community.

“Immigrants sometimes do not know that they are eligible [for food assistance] or they may be afraid to apply because of a previous, negative experience with the County Assistance Office due to language barriers and that sort of thing,” explains Kastner of the coalition’s difficulty attracting immigrant groups.

Government-funded food assistance and immigrant groups have shaky past. In 1996, the Clinton administration took on welfare reform, leading to changes in eligibility rules, which left numbers of immigrants suddenly without assistance. Since then, Kastner said, the rules have become more lenient, but participation rates among immigrants remain low.

Unfortunately, she finds that many individuals “feel like they would rather cut back on meals or do whatever they have to do to survive rather then get food stamps.”

Right now, Philadelphia has about 400,000 people who receive monthly food stamps -- more than one-fourth of the city’s entire population. However, studies by the Coalition show that there are 150,000 more people in Philadelphia who are considered eligible for food stamps but aren’t getting them.

South Philadelphia has been recognized as one of the most underrepresented areas in terms of receiving food assistance benefits, according to a study by the Greater Philadelphia Coalition Against Hunger. Only two-thirds of possible food stamp recipients in that area are reaping that benefit. The correlation between this absence and the concentration of immigrant communities in South Philadelphia can be related.

To tackle issues of poverty and hunger in immigrant communities, Kastner cited multiple solutions and initiatives. Every year she works with about forty volunteers who urge people to apply for food stamp eligibility at the street-level by stopping people waiting in doctor offices and other common places. The food stamp hot-line uses Language Line, an interpretation service, to conduct three-way phone calls between non-English speaking applicants, the hot-line receptionist and a translator.

But, Kastner said the most successful way to reach immigrant communities thus far has been by through the community’s own existing organizations.

“We really like working with groups that are already established in immigrant communities. They already have trust with people in those communities. It’s not like having outsiders come in and tell them to apply for food stamps,” she said.

One such group in the Vietnamese community is the Vietnamese Hung Vuong Association (VHVA), a non-profit organization located at 930 S. Eighth St. Founded by the association’s president, Thoa Tran in 2001, the VHVA’s mission is to assist Vietnamese immigrants, particularly low-income families and elderly members of the community.

Tran has risen as a leader and spokesperson for her community since her arrival from North Vietnam to the United States in 1975. She first founded the Asian-American Buddhist Association and subsequently the Bo De Temple in 1994, but saw a need for a coalition among all immigrants from Vietnam, not just those that follow Buddhism.

“I started thinking that we needed a way to preserve Vietnamese culture,” said Tran, “The biggest challenge we face is that everyone in the community needs to be united. Right now, people have their own families and sometimes they forget where they come from.”

In addition to annual events that promote cultural identity, like the Vietnamese New Year and Mid-Autumn Moon Festival, the VHVA responds to issues of poverty and hunger within their community by participating in the SHARE food program.

Every other week, VHVA volunteers drive to the SHARE food cupboard in the Tioga section of Philadelphia to pick up parcels of groceries, which are distributed to those in need within the Vietnamese and South Philadelphia community. The grocery packages often contain seasonal, fresh fruit and vegetables, canned goods, pastas and other dry foods.

On Tuesday afternoons, Tran and volunteers host a Vietnamese luncheon for primarily elderly citizens to come in to socialize and pick up SHARE program groceries.

“The older citizens, most of them can no longer work so they don’t have a lot of income,” explained Tran about why they target elderly members of the Vietnamese community. “The SHARE food program is extremely important so anyone can come and get more food for their families and maintain their health.”

Despite being quick to help within her community, Tran also stressed the duty everyone has to give back.

“Instead of staying on government assistance, they should work harder for it so they can contribute to American society. We don’t come here and want to depend on anyone – we want to contribute too,” she said.

Although most of today’s Vietnamese immigrants are not in quite the same situation as those who came as refugees of the Vietnam War, immigration is still a difficult and financially challenging endeavor.

Today, most Vietnamese immigrants come to the United States through a green card lottery. They enter an application and wait to hear back. If they are chosen, they have a few months to pack up their lives and make the big move.

According to director of intake and operations at the Welcoming Center for New Pennsylvanians, Amanda Bergson-Shilcock, informal community groups, like the VHVA and various religious organizations, are among the most important resources for today’s immigrants to get situated in their new country.

Tran’s generosity is a testament to that. “We would never turn anyone in need away,” she said.

This article was written and reported by Danielle Zimmerman for Philadelphia Neighborhoods, a publication of Temple University's Multimedia Urban Reporting Lab, and originally published on April 15, 2010.