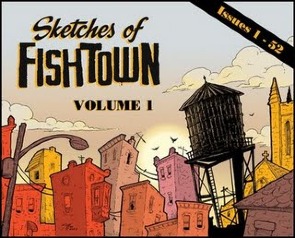 Sketches of Fishtown, an art project aimed at fighting gentrification and highlighting the positives in Fishtown, is Jeff Kilpatrick’s gift to his neighborhood.

Sketches dispel rumors over where Fishtown got its name.  It turns out that Charles Dickens is not responsible for the neighborhood’s keepsake title; there’s not even a record that he was ever there.

Other sketches showcase the transitions of street corners, like the corner of Front and Girard.  The Jumbo Movie Theater stood its ground there from 1912 to 1964.  When Kilpatrick was growing up it was Fox Electric.  Now it’s a thrift store.

“A lot of the older folks in the neighborhood responded to that one,” said Kilpatrick, looking at a sketch that required him to do some archival digging. “It was something they all remembered.”

Kilpatrick and his cousin, Sean Gallagher, began the project in 2004. The initial goal was to produce 52 issues in a year.  Gallagher left the project after a eight issues and Kilpatrick has been solo ever since.  Due to a move, a burglary and time constraints, it took him until 2008 to get all 52 issues done.   Since day one, every issue has been published in The Spirit, a local Fishtown paper owned by Kilpatrick’s cousins.

His sketches represent the ethos of Fishtown; they are the brotherhood, the stories shared on the stoop and over the barstool.

“People will submit ideas,” he said.  “Sometimes they'll send photo references; sometimes it'll be over a barstool like at the Starboard […].  Most of the time they're drunk but it’s usually a pretty good idea.  Probably half of these ideas, especially the memorials, will be over a barstool.”

Tom “Hooker” Lynch was one of those ideas.  An orphan raised by the neighborhood, Hooker was known for his hook shot in basketball, for coaching the kids in sports and for taking care of the Fishtown Recreational Center.

“Everybody loved this guy,” said Kilpatrick.  “It was really hard to find a picture of him but I finally found one and was real happy to draw him.  That was probably one of my favorite ones in the book.”

He tries to feature neighborhood “do-gooders.”  Walt Pomroy is a Fishtown philanthropist who camps out for the Jerry Lewis Telethon every year and serves hot dogs to donating neighbors, among volunteering in many other programs.

“He kind of does it on his own,” said Kilpatrick.  “You don’t find people like him.  He's definitely Fishtown exclusive.”

Kilpatrick tries to find a balance between old and new in his drawings.  One longtime dispute that he documents is over the actual borders of Fishtown.

“Now that everything is being gentrified, Fishtown became a dirty cash word for [realtors] to make money,” said Kilpatrick.  “They're stretching the borders way past Lehigh Avenue, which is a completely different neighborhood.”

According to Kilpatrick, most Fishtowners would consider the borders to be York Street, Frankford Avenue, Front Street and the Delaware River.

Then there are some places that only exist because of gentrification, like GERM Books and Gallery on Girard Avenue.  This store houses paranormal and conspiracy theory books, but it is also a testament to how the neighborhood is changing.

Some sketches are the product of Kilpatrick strolling the streets of Fishtown. A drawing of tennis shoes thrown over a telephone wire reminds readers to take pleasure in everyday beauty.

“A lot of the time I just walk around the neighborhood taking pictures, late at night or real early in the morning,” said Kilpatrick.

Kilpatrick began drawing when he was four years old and focused on cartoons in grade school.  He majored in Communications Design at Kutztown University for one year and graduated from Temple University with a degree in Film and Media Arts. His desire to be a storyboard artist for films led him to drawing comics by teaching him to think about pictures in a sequence.

His sketches take him between three and eight hours to complete, depending on the details. He uses a brush pen with ink and then fine tunes them by picking away at the details with a skinny pen. The text is placed in the sketch through Photoshop or InDesign.

Kilpatrick will keep sketching until the Delaware River runs dry and there are no more submissions or ideas. His latest issue was numbered 86 and he aims to publish a second volume after issue 102 or 104. He tries to draw every week, but every week or so he will take a break.

“Since this book came out a lot of people seem to [notice] if I miss a week. They kind of give me hell about it […] if I see them in the neighborhood.”

This article was written and reported by Melanie Menkevich and Jenn Matusiak for Philadelphia Neighborhoods, a publication of Temple University's Multimedia Urban Reporting Lab, and originally published on December 11, 2009