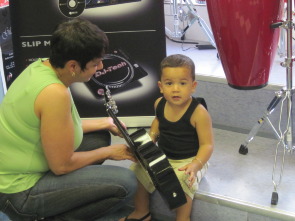 A walk down Lehigh Avenue takes you to several places. It will take you past the abandoned castle-like Julia De Burgos Middle School. Past the street vendors and domino tables along Fairhill Park. It’ll even take you into the middle of boisterous music and laughter emanating from a pale yellow and sky blue building. Blazoned upon the building is the name of the place “Centro Musical.”

Located at 464 Lehigh Avenue, Centro Musical is a Puerto Rican-owned business that most know as a music store, but many more know as a second home. Founded in 1959, the store was originally owned by Nestor Gonzalez when he moved from Puerto Rico to Northern Philadelphia. The original store was located at the old Puerto Rican theater on Germantown and Susquehanna, where it stood until the 1980s when it was taken over by Nestor’s son, Wilfredo, who eventually turned it over to present owner Cristina, his daughter.

“I’m the third generation. Centro Musical is not only a store where you come in to purchase your music. It’s also a place to meet and make new friends. This is considered an area to just hang out and have a good time,” said Cristina. Cristina, the current owner and manager emphasized the store’s focus on revitalizing the community and helping those who need help without a second thought.

This music store, since its inception, has been heavily engaged in the vibrant currents of Fairhill, most notably in fostering the careers of local talent and national talent alike. “We’re promoting this reggaetonera named Katya and we’re trying to release her first album on our record label,” said Cristina. Katya is a longtime friend of the store and spoke eagerly about her relationship with the store and just what it means to be a part of something communally constructive.

“You have to stop here. This place is a magnet. There’s always people hanging out here, having a few drinks. In fact, I personally invite both of you to the Christmas party,” joked Katya. Katya’s debut album is set to be released soon under the store’s record label, CM Records.

Centro Musical has managed to establish a reputation of not only fostering local musical careers, but also aiding in the growth of the various community-based initiatives, working hand in hand with other local organizations as well as sponsoring community events for Fairhill.

“Last weekend we had HIV testing here. We’ve done food drives, we’ve done toy drives. We do a lot of things with the community. We get people involved. It’s not just about making money anymore. It’s about giving back, since we’ve been blessed to be here for 50 years.”

Along with that free HIV testing held on a recent weekend, Centro Musical also held a donation drive for cancer research weeks earlier.

Centro Musical’s reputation has enabled it to gain considerable amount of influence when it comes to Fairhill’s culture. Centro Musical has its own radio show every Saturday from 11 a.m. to 1 p.m. on 1310 AM Mega Radio. The store bought air time from the radio station and holds the show dubbed “Sonido Diferente,” or a Different Sound, with musical guests in the local community as well as having a partnership with Philadelphia City Councilwoman Maria Quinones Sanchez with her own segment called “Council with Maria Quinones Sanchez” in order to inform and open up a forum for the community.

Centro Musical has, over time, developed into what most people interviewed call a “hub.” While geographically it may not be the absolute center of Fairhill, the store packed to the brim with shelves of CDs, LPs, and music memorabilia has shown itself to be favorite place.

Edwin Guzman, a Fairhill resident and local musician, spoke fondly of the store as the proverbial hub. “This is the hub, the university of music. Anything you want to hear, look for, you get it here, man.” Guzman even sat down with internationally famous salsa artist Michael Stuart and sang a few bars together with him. Fittingly enough, the store watched and admired the two duet, as homegrown met celebrity

Stuart espoused the ideals of cultivating local talent and ultimately, helping those who need a voice. “I always come down here because first of all, they’ve sold my records since my first album. And it’s always been an in store, family wise (environment). They always have food and drinks waiting and cds that I take without paying,” joked Stuart, a native Puerto Rican raised in New York, who has had a long relationship with the store.

The store itself is an unassuming venue, devoid of glitz and glamor but chocked full of personality and downright warmth. Cristina invited us to return and let us know that if there was one thing that she was used to, it was people visiting and getting hooked to the friendly environment and the store’s commitment to forging relationships with its patrons, or as she put it, their family members.

“It’s something interesting. It’s a store. A business. But the relationship it has with musicians and artists makes it a happy spot.”

The established idea of stores is that they are all just to make money and that’s it. “No, that’s not it at all. This family has dedicated itself to helping the community,” said Francisco Sandoval, manager of Taller Puertorriqueno, a Fairhill-based arts organization, and good friend of Centro Musical. “This place has cultivated friendships and ultimately, development. In simpler terms, this place has sprung forth with ideas. From just a small little place.”

This article was written and reported by Rodrigo Torrejon and Brader Jimenez for Philadelphia Neighborhoods, a publication of Temple University's Multimedia Urban Reporting Lab, and originally published on June 28, 2010.