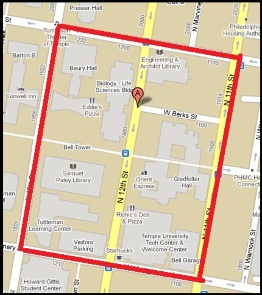 Various amateur base ball clubs used Camac Woods as a home diamond during the 1860s with the Athletic Base Ball Club the most popular tenant.

The 600-acre estate belonged to physician William Camac, who maintained a summer residence on the grounds.

The diamond was situated adjacent to the St. Georges' cricket grounds near what today is recognized as the intersection of 12th and Berks.

The first recorded competitive baseball match played at Camac Woods (7/24/1860) was between the Olympics and the St. Georges' base ball club. The Olympics won the contest, 25-17, playing under New York style rules.

Aside from Athletic, numerous local ball clubs used Camac Grounds as a home field, including Olympic and Mercantile.

By the mid-1860s Camac, who was an assistant surgeon in the Union army, turned his residence into a military hospital and sold most of the remaining land to a developer who used the grounds to build row homes.

Athletic left the crowded grounds in 1863 and moved to a field at 18th and Master for the 1864 season.

By 1869 Camac Woods, the St. Georges' cricket field, and the military hospital were demolished for more row homes.

Temple University's Paley Library, Bell Tower, and Beury Hall now reside where the fields once were.

(Note: When writing about baseball in the 1860s it is proper to use “base ball” as this is how it was worded during the respective era. )

For more information on the history of baseball in Philadelphia contact Patrick Gordon, Managing Editor of the Philadelphia Baseball Review, at pgordon@philadelphiabaseballreview.com.