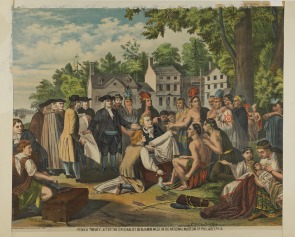 The record of Penn’s Treaty or conference, is a singular feature in the early history of Pennsylvania, unparalleled in the annals of any other Commonwealth, and the spot whereon the simple and touching drama was performed by the Quaker and the Indian, should long ago have been made one of the chief attractions of Philadelphia. The spectator, whether a tourist from abroad, or a citizen belonging in our midst, is, in either case, shocked and mortified at the spectacle it presents in its dilapidated condition, and turns away, mourning the indifference that permits it so to remain.

-The Committee on Roads and Bridges, 1852

When the long history of the site that is now Penn Treaty Park is taken into consideration, it would be difficult to guess at which point the above description of the oft-neglected site was made. For over 150 years dedicated Philadelphians made efforts to maintain the place where (it is generally accepted) in 1682, shortly after his arrival to North America, Penn made his Treaty of Amity with Chief Tamanend of the Lenni Lenape tribe. Private property and industrial space were converted by activists into a space the whole community could enjoy, but for the greater part of the park’s history, the community did not do its part.

The Treaty Elm that had previously marked the spot was uprooted in a storm in 1810, so in 1827 the Penn Society, led by famous Philadelphians like Roberts Vaux, dedicated a marble obelisk to the historic place to ensure its remembrance for future generations. Yet the obelisk could sometimes be found under large piles of wood since the nearby Wainwright and Bryant Lumber yard used the area for storage. In 1892 and with much fanfare, Kensington leaders including those in the Bramble Club established Penn Treaty Park. These leaders worked to ensure that the land on which the monument stood would be owned by the City of Philadelphia (it had sat on the Vandusen estate up until this point). Yet the park fell into decline. By 1987, community activists like Dr. Etta May Pettyjohn, John Connor, and the Fishtown Civic Association took a renewed interest in the park, which had become a hangout for neighborhood delinquents. They rededicated the park, expanding it to its present five-acre size and adding two new commemorative sculptures – one of William Penn by Frank C. Gaylord and the other depicting the native side of the treaty by Bob Haozous.

These hard-fought battles to commemorate the famous treaty and maintain the importance of the historic space seem to punctuate longer periods of decline, mismanagement, and a general lack of regard. According to local historian Ken Milano, within a month of the addition of the new William Penn sculpture, “the figure was vandalized with spray-painted graffiti.”

Fortunately, since the presence of community groups like the Fishtown Civic Assocation has grown, the park has received sustained attention and respect. Friends of Penn Treaty Park aid the Fairmount Park Commission in its management; they run monthly cleanups, have regular fundraisers, and have added new playground equipment. These concerned community leaders actively work to improve the space and have even developed an online museum dedicated to Penn’s Treaty. Moreover, the park has become the site for popular events like the annual Fishtown Shadfest. These developments suggest a widespread interest and respect within the neighborhood for the space – the result of a century’s worth of determined activism.