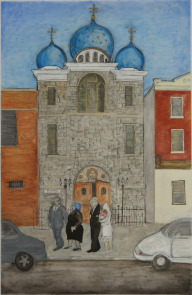 However, the rest of Northern Liberties wasn’t empty at all; it was full of row houses occupied by mostly older immigrants from Ukraine, Russia, Poland, and Romania. There were many small manufacturing businesses like Ortleib’s Brewery, which sent the smell of fermenting hops through our windows; there was Schmidt’s bottling plant; there was Cannuli Brothers’ House of Pork meat-packing plant next door to my studio, which had a much more unpleasant smell than the brewery. There was Harry Shur’s hardware store where you could ask Harry for just about anything and he would rummage through the attics of his block of padlocked row houses and eventually he would reappear with what you wanted, usually ancient and rusty, but more or less serviceable. There was Kaplan’s Bakery, still there today at 3rd and Poplar. And there was the giant Burk Brothers Tannery which, over the great objections of the neighborhood, was demolished by the city, eventually making room for Liberty Lands Park. There were also many Eastern Orthodox churches and the black-robed and bearded priests were a frequent sight in the neighborhood.

But this neighborhood was gradually on its way down. Over the next few years, most of the businesses closed, and the older residents moved away to be near their children who had left the neighborhood because there was no longer anyplace to work. There was nothing to keep anyone there other than the churches, and to this day many former residents still return to attend these churches, at least on special occasions.

As the neighborhood emptied out, more and more artists started moving in, buying or renting the inexpensive row homes and industrial buildings. For several years there were conflicts between the old time residents, the artists, and the real estate speculators, resulting in anger, tire slashings and possibly murder.

In 1988 my husband and I bought a house on American Street. There was a mini real estate boom going on and many people thought that Northern Liberties was going to be the next Society Hill. However, about a year after our daughter was born in 1990, our neighborhood began burning down around us. More and more of the houses and factory buildings were empty, and the owners did not want to make the investment to rehab the buildings, they just wanted to sell the land and cash out. It is expensive to demolish a building, but when buildings were “accidentally” left open, the job was done for free. Scavengers would go into an empty building to cut out the copper pipes and start a fire with their torches, or someone, at that time often crack addicts, would build a little fire to keep warm and the fire would get bigger, and pretty soon the building was gone, insurance collected, and the land available for sale.

Blanche’s house, at the corner of American and Laurel, to me illustrated the process of change in Northern Liberties. When we first lived on American Street, Blanche, an elderly and homebound woman, lived on the corner, and I walked past her house every day on my way home from my studio. She would often stop me as she sat inside her house by an open window, and ask me to go buy her a quart of milk or something. After a few years, Blanche died, and was replaced by a man claiming to be her nephew who seemed to be running a crack house with many visitors coming to call. At some point the house was raided by the police, and I remember one day walking by and finding the front door open, the occupants gone, dirty mattresses strewn about and half eaten plates of food left out for the rats. Eventually the house was boarded up and left to decay.

Now this same house is a nicely renovated row home across the street from the park, where there are often neighborhood events: music, movies, and picnics. There is a playground at the north end of the park, just where the burned and twisted shell of the Morris Schiff furniture warehouse collapsed and was left where it fell for most of the years that we lived on American Street.

There are complicated economic and social factors at work here that have affected and determined the process of change, but I am looking at this process from a completely personal point of view, as these changes have affected my life and that of my family.

Up until about 1990 I was making large sculptures and installations, until my neighborhood intruded into my life in such a way that I decided to document what was going on around me in a direct way. I am now examining Northern Liberties’ newest incarnation as a mecca for hip young people, much in the news recently with the murders at the Piazza. Sushi bars have sprouted up in former building shells and shoe warehouses, while many artists have been forced to move north due to rising real estate prices – even as developers go bankrupt in the midst of the financial crisis. My paintings and monoprints present my personal experience of this process.

Jennifer Baker is a painter and sculptor who has worked in Northern Liberties since 1978. She attended the Pennsylvania Academy of the Fine Arts and Philadelphia College of Art (now University of the Arts). She has shown her work at Art 101 and Pleiades Galleries in New York and Nexus Gallery, F.A.N. Gallery, The Painted Bride Art Center and many others in Philadelphia. She was selected for a Challenge Exhibit at Fleisher Art Memorial in 1997 and was a recipient of a Pennsylvania Council on the Arts Visual Arts Fellowship in 1993 and a finalist for a Pew Fellowship in the Arts in 1997. Ms. Baker presented her “Northern Liberties Project,” at the First Person Festival of Memoir and Documentary Art at the Painted Bride Art Center in 2009.