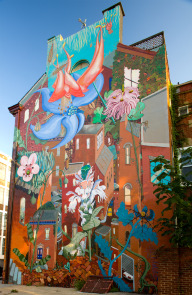 This is about the mural that was painted when I first moved to the neighborhood of Northern Liberties in 2000. It's a painting of medicinal plants, healing flowers, bark, leaves and roots, and it was originally designed for the side of Penn Herb Co. on 2nd street but was moved due to construction plans that never happened. The title comes from my brick-paved backyard and is homage to the garden that grows there and all the gardens that flourish in Northern Liberties, and especially Libertylands, the neighborhood- owned and -run beautiful public park.

I noticed that in my garden between the cracks in the bricks and soft moss grew all kinds of seemingly magical little flowers that were seeded the year before, and I depicted some of these in the mural, using cast glass and paint. The mural tells the story of the spring that I painted it, I added details from my surroundings as I painted it, like Gabor's truck in the garage, the Russian orthodox Easter procession that passed the scaffolding one day, a girl on a bike who stopped by alot, and other details that made it fit into the web of life where it was to live, in this ever changing little neighborhood that recently grew high rises and lots more people.

I included a giant columbine as the pinnacle flower at the top to reclaim the flower from the news of past years, and other flowers, like self-heal, I chose to reflect the self healing capacity of the neighborhood, for I was fascinated how a community of artists and creative people came together to reclaim this neighborhood and help to make it into what it is today. I recently returned from painting a large mural in the community of Christiania in Copenhagen, Denmark, and I was reminded about what Northern Liberties used to look like when I moved here, for it was full of green, and a lot of the buildings that were built in recent years were made on these beautiful green lots, so many trees and little artistic corners that have vanished and been replaced with concrete and new structures or parking lots. The mural is about this little bit of wilderness that I sensed when I moved to the community. The giant flowers maybe representative of the strong personalities that were making things happen, shaping change in the area, lifting their heads above the rest to create something great.