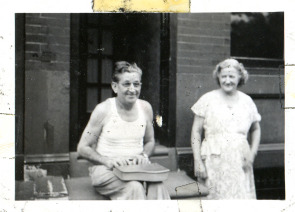 Blakey sat on the curb deftly slicing the ten-cent pimple ball in half with a single edged razor blade. He wiped the moisture from inside the two cups with his t-shirt and smoothed their rims on the sandpapery sidewalk.

In the game of halfball the 'field' is a small street between factory buildings. The pitcher tosses the ball (underhanded), from sidewalk to sidewalk to the batter, who tries to hit it against the wall behind the pitcher without having it caught on the rebound. The first and second floors count as a single, third floor a double, fourth a triple, fifth floor a homer and over the roof is a grand slam. The pitcher can put an amazing amount of stuff on a haffie. I've seen some batters double swing at floaters and strike out on curves and sinkers that moved like hummingbirds. The game can be played one on one or in teams. The guys I played with were Blakey, Goose and Hector.

Clarence Blake (we only called him Clarence to get his goat), lived in the back rooms of his father's hardware store. On days when our games were rained out we'd play 500 or Crazy Eights with his mom (who cackled and snorted and drank smelly wine as she took us for all our chips), or sit around swigging sodas listening to Blakey's comedy records. Our favorite was a Shelly Berman bit where he tells his father that he wants to be an actor. I think that some of Hector's first English phrases were spoken with a Jewish accent.

Goose, whose real name was Edwin Guzman, was the best athlete of the bunch. Despite his Coke bottle glasses (always worn with an "animal strap"), he was a star on St. Edward's baseball and football teams. He coached us in the finer points of the games and taught us to curse in Spanish. Goose had an older brother we called Big Goose, who called me Humphrey (I'll never understand that guy's impression of me), and enjoyed demonstrating judo holds on me. One of his pleasures in life was to grab me by the Adam's apple as he sang a perfect Del Shannon imitation of "Runaway", screaming, "C'mon Humph, harmonize!". I avoided the Big One as much as possible. Hector was Goose's younger cousin, fresh off the plane from Puerto Rico. He didn't know much English, but his ingenuous personality, athletic abilities and Goose as his translator made it easy for him to be a member of our league. Hector stood out among us pimple-faced goofballs. He was a tall, lean kid with pride in himself, a great smile. He and his family had beautiful dark skin. His sister was a trumpet and harmony serenade to me. The other handsome guys in the neighborhood were aloof and condescending, Hector was a natural, likeable guy. My sisters were all nuts about him.

Goose was hot. He'd already roofed two, banishing me from the mound.

"Not with my stuff," boasted Blake, tossing Goose a lethal floater.

"Try this one Goosey Gander."

Goose replied by whacking Blake's sinker into the curb.

"Foul, strike two. Got your mind, baby," taunted my ace reliever as he let loose a curve.

Goose nailed it. Another one over the roof. He held up his bat as if it were a scepter.

"You may call me the King of Swing."

"You pay for the next ball, King," sulked Blakey.

Goose dubbed Hector a knight of his realm and ceremoniously handed over the royal broomstick for his at bat. Hector was setting up for the first pitch; wagging his bat and butt and striking his Orlando Cepeda pose, when around the corner came Big Goose. Strolling badass in his shiny Cuban heels. He held an unlit Marlborough in his teeth.

Hector, familiar with the wrath of the Big One, acquiesced.

"I want Humphrey to pitch. C'mon Hump, show me what you got."

Big Goose whacked my first pitch over the roof, lit his ciggie and strolled off doing the witch's cackle he laughed whenever he pulled a fast one on me. (Now that I think of it, it closely resembled Blakey's mom's.).

We sat on the curb looking up at the ball-eating factory, thinking of the hundreds of halfballs scattered about its roof.

"There's a fire escape around the corner, said Goose, I'll give you a leg up."

This story previously appeared in the book Golden Slippers by Frank Skillman, 2007.