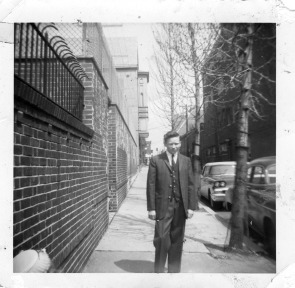 Orkney Street was a little bit bigger than an alley. Two rows of two-story, marble-stepped homes; built to house the families of the weavers, dyers and strongbacks, who worked in the carpet mills that were owned by the same squires our ancestors toiled for in the old country. Surrounded by factories, warehouses and the St. Christopher's Hospital for Children, it sat in the shadow of the previous century.

The street was so narrow that you couldn't park a car on it, leaving it traversed by only the necessary vehicles of the coalman, milkman or hospital delivery truck. This lack of traffic made it a virtual arena for street games and provided us with a place to draw on a grand scale.

With shards of brick and nubs of colored chalk, Mickey and I drew pictures in the street. Mick duck-walked around the blacktop working on a curb to curb battle scene where American and Nazi soldiers fought from barbed wire trenches. He scratched in Howitzers on opposing mountain sides blasting away at his boxy, heiroglyphic troops. Mustangs and Messerschmits tore across the asphalt sky, dog fighting and straffing tank columns that crashed through the wooded areas behind the infantry. With his nose to the street he drew in chevrons and decorations on the uniforms, empty shells popping out of the Lugers and Garands, trickles of blood oozing from the dead and wounded, who laid x-eyed in bomb craters strewn with broken weapons and body parts. Mick was a master.

My mural also depicted our fathers' nightmares. In white, blue, and brick scratch I made a seven foot battleship, complete with sailors at gun stations and lookout posts, the admiral on the bridge and the reconnaissance plane on its launcher at the stern. In my new found technique of perspective I drew two PT boats hopping through the waves. Lurking on the horizon a Japanese cruiser aimed its guns.

Mick strolled over to where I was working and offered me a plug of black licorice. He squatted beside me to touch up the braid on my Admirals cap and suggest a sub periscope in the forewater.

"You oughtta put some Kamikazes in there, Buddy...blow a hole in the side a that ship...get some action goin'", he critiqued.

I wasn't as taken as Mick by the death and destruction of battle. For me it was the instruments of war: the guns and the uniforms, the machines, shapes and colors, that were having-at my imagination. Mickey was about to return to blasting the heads off some Nazis when tottering down the street came Old Drunken Harry, the Ex-Marine. Harry was a guy who could always be counted on for some inspirational blood and guts stories from his campaigns in WWII.

"So, ya little sons a sea cooks,," he would growl, putting up his dukes.

His slurred and colorful military lingo was a big part of his charm. He was a little Bantam rooster of a guy who liked to spar around with us. If you weren't careful he'd slap the stink off you.

Mickey got him to take out his glass eye (Harry lost the real one at Iwo Jima), which he put into the pocket of his denim shirt after a few drunken attempts to get it back into his slimey, quivering socket. He was telling us how he captured a Japanese general at Guadalcanal, and was about to take off his artificial leg for us when the old bag from across the street gave him the bums rush.

Our chat with Harry gave me the idea to replace my PT boats with an LST, so Mick and I bombed the PTs with spit and rubbed them out with the soles of our sneakers.

As time passed, cars and trucks rolled over our fleets and armies, fuzzing our lines, softening hard edges. Thunderstorms pelted our canvas with fat plops of water. Hop Scotch and skully grids were drawn over the places where once great battles raged.

A couple of years ago I made a pilgrimage to the old neighborhood. I found entire blocks demolished. Factories and houses with sheets of tin across their windows had become homes for ghosts and junkies. The schools I attended were gone and the railroad had been paved over. But as I stood on the corner of Orkney and Huntingdon and looked down at the street, I could swear I saw a faded Nazi's head by the curbside.

Frank Skillman grew up on Orkney and Huntingdon Streets in the 1950's. This story previously appeared in his 2007 book, Golden Slippers.