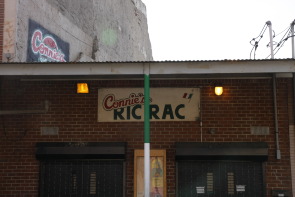 On a balmy evening in April the Italian Market in South Philadelphia is abuzz with activity. Cigar-smoking Italian men, a young Mexican couple relaxing on a sofa, and the neighborhood’s hipsters—baring skin grown pale by months of winter clothing—have all taken to the light and warmth of the night like moths to a flame.

Nestled amidst Mexican restaurants and pizzerias stands a broad, one-story brick building with a sign, listing upcoming musical and theatrical events. This is Connie’s Ric-Rac, the only music venue in the Italian Market, and, some might argue, the only place of its kind in the entire city.

The space is a legacy of the Tartaglia family, longtime Italian Market residents. For several decades Joe Tartaglia Sr. ran a stand on 9th and Ellsworth Streets, employing his sons Joe Jr. and Frankie to help him sell such merchandise as apples, turtles, Kung Fu movies and their most popular product: Fixodent toothpaste. Down the block at 1132 South 9th Street Joe’s wife, Connie, ran Connie’s Ric-Rac: a discount electronic appliance shop.

For thirteen years Connie’s business steadily progressed until sales plummeted in the mid-nineties, possibly coinciding with the dawn of the eBay age. In 1996 she closed the shop and began to sell her wares on eBay, realizing that the same force that might have caused the demise of her store was gainful in the end—she made far more money over the Internet than she ever did from the store. Thus, 1132 was left for storage space.

Until recently, the blocks of lower 9th Street have struggled. In 2000 the City Planning Commission pronounced the whole area blighted. Frankie Tartaglia attests to the deterioration of these blocks in a documentary video he made in 2006: “If you go past Washington Avenue, that’s where all the business is. People on the other side of 9th Street say this is where people go to die.”

In 2006, fueled by a passion for the arts—both brothers are musicians and filmmakers, Frankie is also a comedian and painter—and a desire to do something about the state of the neighborhood, Frankie and Joe Jr. convinced their parents to let them take the Ric-Rac out of storage and transform it into an arts space. Wanting to foster their own sons’ talents, they happily agreed. Despite a forced two-year hiatus when the brothers worked to get the space up to code, Connie’s Ric-Rac has reemerged for a second time—now as a theater of the arts.

Walking into Connie’s Ric-Rac is like taking a step back a few decades (witness the Alf, E.T. and Atari paraphernalia) and entering the garage where a grunge band practices, or the basement you’ve fixed up to hang out with your friends. This is essentially what the Ric-Rac is. Now, however, the Tartaglia brothers are now grown-up adolescents and they’ve expanded their repertoire from mere hanging out to offering a range of art and music performances, comedy classes, as well as a multitude of (broadly defined) cultural events.

Every night Connie’s Ric-Rac offers something different. The Tartaglia brothers’ band, The Discount Heroes, plays weekly. Frankie’s favorite recent act was a man who performed puppet karaoke. He also enjoyed the summer of Point Break: the Play. “We picked a different Keanu (Reeves) out of the audience for every show!” Frankie gushes.

Tonight is Monday, so it’s a combo open mic/comedy night. A diverse group of aspiring comedians have shown up, eager to practice their material. Connie herself has arrived, after glimpsing a post on the Ric-Rac’s MySpace page that claimed Keith Richards was paying the space a visit. Knowing her energetic, charming and sometimes wacky sons, Connie half believed it could be true. “Some people watch scary movies, some ride roller coasters, I just had my sons. It’s never a dull moment,” she explains, pointing lovingly to the faded family photos hanging behind the bar.

There is a bar as well as a bartender, but with no liquor license as of yet there’s nothing to drink unless you’ve brought it yourself. Throughout the evening, friends of the Tartaglia’s, young hipsters new to the neighborhood, and longtime South Philadelphians happily drink their own microbrews and Bud Ice’s.

2009 is looking a lot different than 2000, different even than 2006. Though this block of 9th Street still houses a large empty lot where an ice factory once stood, Connie’s Ric-Rac now has plenty of neighbors. To the right is Bella Pizza, to the left Teri’s, a new, much talked about restaurant. Sprinkled throughout the block are several Mexican-owned stores: Moctezuma Restaurant, Prima Pizza and Taqueria, Discolandia and Mexibike. Neighbors have warmed to the Ric Rac. Many attribute the block’s revitalization, at least in part, to this newfound arts and cultural space.