The Old Esposito Soda Factory: “The Legends of Primo Gassosa” 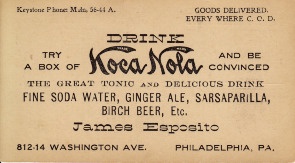 These days when most of us reach for a soda on the supermarket shelf our options are limited to a few international brands that have cornered the market. And when we do grab it, it will most likely be in the form of a plastic bottle or aluminum can. But in the early 20th century, the business of soda, like many others, was a local enterprise.

In 1900 two brothers, recent immigrants from Italy, founded a soda and beer bottling plant at 812-14 Washington Avenue. The business went through several product and name changes, often taking on a different name every time there was a new product, according to Robert Esposito, the grandson of James “Giacomo” Esposito, one of the brothers.

The name that is most likely to ring a bell these days is probably its last one: “Primo Gassosa,” an Italian name meaning “First (or first best) Gas Soda.” The soda was popular for many years. Some claim that it’s cola and lemon-lime flavors rivaled Coca-Cola and 7up. However, the changing of the times—the transition from re-usable glass bottles to disposable plastic ones, and shifts from small stores to giant supermarkets—made it too difficult to continue. However, James Esposito’s grandson Robert, and great-grandson Alexander have taken on the historical documentation and research of the family soda business as a labor of love. That Alexander Esposito is a private investigator no doubt helps when unearthing artifacts such as the unopened case of Primo Gassosa he found in a South Philadelphia supermarket basement years ago.